(CNN) -- A Texas woman accused of killing her toddler daughter and dumping the body in Galveston Bay has been found guilty of murder by a jury in Galveston, Texas. 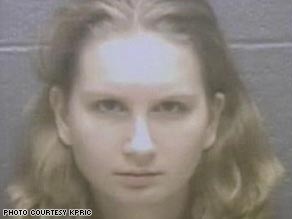 Kimberly Dawn Trenor received a life sentence without possibility of parole in the murder of her daughter.

Kimberly Dawn Trenor, 20, showed no emotion as the verdict was read late Monday. Trenor had pleaded guilty to tampering with evidence in the case, but pleaded not guilty to the capital murder charge.

She received a life sentence without the possibility of parole.

The body of Trenor's daughter, Riley Ann Sawyers, was found in October 2007 in a large blue plastic container on an uninhabited island in Galveston Bay.

According to an affidavit, Trenor told police Riley had been beaten and thrown across a room and that her head was held under water before she died on July 24, 2007.

Another piece of evidence shown to the jury during the trial was a page of Trenor's journal where she talked of beating the child, according to CNN affiliate KTRK.

"I just kept hitting her with the belt again and again. I don't know how long, but I remember her trying to get away and me knocking her back down," the journal said.

A court date has not been set in that case.

All About Murder and Homicide • Criminal Trials