WASHINGTON -- A federal judge began hearing a lawsuit alleging the abuse of circus elephants, including the use of heavy chains, tethers and sharp tools called bullhooks. 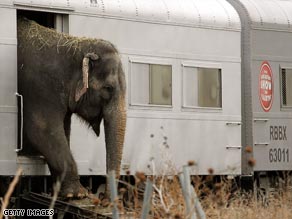 A Ringling Bros. circus elephant steps out of a train and onto a wooden ramp in this file photo.

Defense attorneys for Ringling Bros. deny any abuse and hope the trial will disprove what they call years of "misinformation" about the treatment of circus elephants.

Several animal rights groups are seeking an end to practices they say violate the federal Endangered Species Act. The treatment includes "keeping (elephants) chained for many long hours each day and using bullhooks on them," attorney Katherine Meyer said Wednesday in her opening statement.

Meyer displayed to the judge what she said was an example of a bullhook -- a device with a wooden handle and a curved metal tip used to prod the animals along. Meyer also held up a length of heavy, galvanized metal chain she said circus handlers employ to restrain the elephants.

The suit, which seeks an injunction, alleges that endangered Asian elephants used by the circus spend most of their lives in chains. They also travel for hours, chained in boxcars as they are transported by train from city to city.

U.S. District Judge Emmet Sullivan is hearing the case without a jury. The case is expected to last about three weeks.

The judge asked Meyer whether the chains might also be used at the zoo. She acknowledged yes, "but not for this amount of time."

Ringling Bros. and Barnum and Bailey Circus and its parent company, Feld Entertainment, deny the elephants are mistreated.

"There's been no abuse of these animals," lead attorney John Simpson said during his opening statement. Simpson told the judge the bullhook is also known as a "guide" that serves "as an extension of the handler's arm" to cue the elephant to perform a desired behavior.

Simpson played several video segments for the judge and used first names such as "Karen" and "Lucy" to refer to the elephants.

"This is a family-run business," Simpson said, referring to Feld Entertainment. "Elephants are part of that family."

Simpson told the judge the Endangered Species Act does not apply to elephants in captivity and that the control of such animals rests with the U.S. Department of Agriculture. He said the USDA, through its Fish and Wildlife Service, has long validated the treatments now questioned by the animal rights groups.

But Meyer said she plans to show video later in the trial showing a circus elephant named "Lucy." She said the video shows the animal "dripping blood during the show after she was bullhooked."

Circus attorneys said there's no evidence any wounds are the result of mistreatment. They accuse the animal rights groups of using the case for a broader purpose.

Lawyer Michelle Pardo told CNN "the agenda of these animal special rights groups are that they want elephants out of captivity but they are starting here with the circus."