(CNN) -- The FBI announced Wednesday that it is working with Illinois state and local police to review evidence related to the 1982 Tylenol murders. 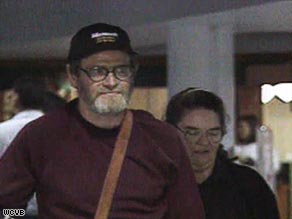 "This review was prompted, in part, by the recent 25th anniversary of this crime and the resulting publicity," the FBI said in a written statement.

"Further, given the many recent advances in forensic technology, it was only natural that a second look be taken at the case and recovered evidence."

The anniversary coincided with a number of tips to law enforcement agencies related to the crimes, the FBI said.

Agents on Wednesday searched the Cambridge, Massachusetts, house of James W. Lewis, who was convicted of sending an extortion note to Johnson & Johnson but denied having anything to do with the poisonings.

Lewis's wife LeAnn is listed as administrator of a Web design company called Cyberlewis.com. Its Web site lists the company's address as the same address that authorities searched Wednesday.

On its Web site is posted a note that says, in part, " ... I was villified (sic) globally as the Tylenol Man, accused of being the mass murderer who spiked Tylenol with cyanide in Chicago back in 1982, killing seven. Those grotesque accusations obviously were false, otherwise I could not be writing these words. After 25 years, the Tylenol murders remain unsolved. I have lived a long, bizarre life and I have seen a lot, yet I am literate and lucid enough to view and describe, compare and contrast hugely diverse worlds, cultures and topics, without a moment of boredom, all with an eye to professionalism, demographics and marketability plus ears and heart sensitive to good taste and victims' feelings."

A call to LeAnne Lewis' telephone number was not immediately returned.

She would not say whether they were related to the Tylenol case.

Criminal charges have not been filed in the seven Chicago-area killings, which occurred after Extra-Strength Tylenol capsules were laced with potassium cyanide.

The killings led to changes in packaging of over-the-counter drugs.

Johnson & Johnson, parent of the drug maker, McNeil, was widely credited for its aggressiveness in recalling the product and its openness in dealing with the killings, and the product quickly bounced back in sales. It remains a popular analgesic.

"Johnson & Johnson cannot comment on the status of any ongoing investigation into the murders of 1982," said company spokesman Jeff Leebaw.

CNN's Fran Fifis contributed to this story from Boston.

All About Johnson & Johnson • Federal Bureau of Investigation • Tylenol