Officials crack down on booze-serving parents 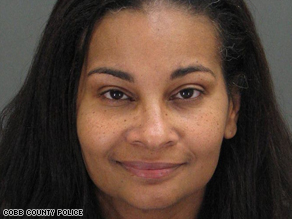 Kecia Evangela Whitfield, 43, is charged with furnishing alcohol to a minor and reckless conduct.

According to police, the investigation revealed that a classmate's mother served alcohol to Reed. Police charged 43-year-old Kecia Evangela Whitfield with furnishing alcohol to a minor and reckless conduct, both misdemeanors.

Whitfield was released on a $10,000 bond and awaits a court date in April. Records on file with the Cobb County solicitor general's office indictate she has not yet entered a plea or obtained a lawyer. She did not return CNN's phone calls.

If convicted, she could receive up to a year in jail and fines totaling thousands of dollars.

Toxicology reports for Reed will be released in six weeks, officials said. His death stunned the small community of Powder Springs and sounded an alarm for parents.

"What we have to realize is that our kids do think they are invincible," said Patti Agatston, a mother of another Harrison High School teenager who lives in Reed's neighborhood. "We can't be enablers. We've got to be adults and say 'no.' "

At least ten states including Virginia, Minnesota and New Mexico-and Georgia, where Garrett's accident occurred, allow parents to give their own child alcohol, according to the Alcohol Policy Information System, a federal website that tracks alcohol laws.

The alcohol can typically be given to the minor in the guardian's home or a private setting and there are no age limits, according to the National Conference of State Legislatures. However, nowhere is it legal to give alcohol to other people's children.

Officials say teen binge drinking is reaching epidemic proportions, and states and municipalities are scrambling to implement "social hosting" laws that carry stiff fines for parents whose homes are used for drinking parties, whether they know about them or not.

At least 24 states have enacted social hosting laws that fine parents several thousand dollars for each offense, said Jim Mosher, an expert tracking alcohol policies at the National Conference of State Legislatures. The fines, he said, are an effective deterrent.

A 2005 study conducted by the American Medical Association reported that about one-third of teens said it was "easy to obtain alcohol" from their parents. That figure jumps to 40 percent when it comes to getting alcohol from a friend's parent. One out of four teens said they had attended a party where minors were drinking in front of parents.

Some communities are using their zoning powers to create local social hosting laws. These laws usually result in misdemeanor charges and jail time is rare. Prosecutors' offices are often busy with other cases and don't bother to charge unless there is a serious incident or accident, policy experts said.

"It's very difficult for us to knock on a random door and say 'are you drinking?' " said Sgt. Dana Pierce of the Cobb County Police Department, the agency responsible for investigating Reed's case. "We usually have to respond to some kind of nuisance call."

In Massachusetts in January, a court sentenced a mother to jail for serving alcohol to minors at a party in her home. A teenage boy died in an auto accident after leaving her party. In Charlottesville, Virginia, two adults served jail time in 2007 for providing alcohol at their son's 16th birthday party.

Some parents consider giving a teenager a drink a rite of passage -- and that contributes to high teenage drinking rates, said Richard Yoast, director of the Department of Healthy Lifestyles and Primary Prevention at the American Medical Association. "It's a myth that adults and children are buying into, and it creates pressure on the child to drink," Yoast said.

"The biggest problem to overcome is the fact that parents feel like they are helping their kids," said Denise Thames, director of Mothers Against Drunk Driving in Georgia, "They often forget they are in fact breaking the law."

The affluent suburbs near Powder Springs, where Reed's accident took place, are not immune. Police say there were several teenagers hanging out with Reed the night he died, including Whitfield's stepson.

Several of Reed's close friends at Harrison High School said alcohol is easy to get in their community and students can find a drinking party each weekend if they want to. It is easier to get alcohol from older friends and relatives or parents than buying it with a fake ID, they said.

"As long as you have money, you can get it," said Eric Stallworth, a senior at Harrison High School, who was close friends with Reed. He described his friend as a charismatic and popular boy, who was fiercely competitive when it came to sports and dreamed of playing college football.

While there is no county or city ordinance on social hosting in Powder Springs, or in Georgia, some parents are fighting back.

The Cobb Alcohol Task Force, which also serves Powder Springs, is a volunteer group working to reduce teens' access to alcohol. The group launched a campaign called "Adults Who Host Lose the Most" to educate the public about the dangers of illegally providing teens with liquor.

But that may not be enough to stop a fatal accident such as Reed's.

"Unless you get everyone to do it, kids will find out one place where they can get alcohol and you will have these kinds of incidences," Finck said. "Everyone has to get on board."

Ultimately, parents need to step up and take responsibility, said Shawna Snapp of Blue River, Oregon. Her son, Ryan Snapp, nicknamed "Snapper," died two years ago in a car accident. He was 17 and the teenage driver had been drinking alcohol obtained from an adult.

"We're not here as parents to be their best friends," Snapp said. "We are here to guide them for life."

All About Mothers Against Drunk Driving • Georgia