Father of missing girl vows no revenge if child returned

SATSUMA, Florida (CNN) -- The father of a missing 5-year-old Florida girl made a renewed plea Thursday for the return of his daughter. 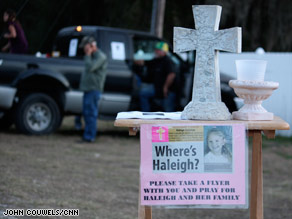 The search continued Thursday for Haleigh Cummings, 5, who went missing from her home near Orlando.

"If you have my daughter and you're watching this, drop her off somewhere safe," Roland Cummings said of his daughter Haleigh.

He said he could think of no reason Haleigh would be taken.

"Why would anybody be sick enough" to abduct a child? he asked.

Cummings, 25, said earlier that he and Croslin had passed lie detector tests.

Croslin, 17, was the last person to see Haleigh when she put the girl to bed Monday night in their Satsuma, Florida, home. She said she awoke in the middle of the night to find Haleigh gone and the back door to the double-wide trailer propped open with a brick.

Putnam County authorities on Thursday continued working with the FBI and state investigators to search a five-mile area for Haleigh.

Police have no official suspects, but say they are treating everyone they interview as one.

"All the world's a suspect" now, a sheriff's spokesman has said.

Cummings said earlier that he was surprised when he arrived home from work at 3 a.m. Tuesday to see his girlfriend awake, and he asked her why she was up.

"She said, 'Your back door's open and your daughter's gone,' " Cummings told Nancy Grace on her show on CNN's sister network HLN on Wednesday night.

Croslin waited until Cummings came home to phone 911 about the girl's disappearance, though it's unclear how long that wait was.

Watch the father describe what happened »

Police said Wednesday that Croslin had tucked the girl and her 4-year-old brother into bed at 8 p.m. before going to sleep at 10.

Croslin told police she woke up around 3 a.m. to use the bathroom and returned to find the girl missing. The boy was still in bed, Cummings told CNN.

A brick was propping the trailer's door open, Croslin told a 911 dispatcher.

The father said he has used the back door only two times since he's been living in the trailer.

Police say they believe the girl was abducted.

"There's no longer any reason to believe that the child simply wandered outside," Maj. Gary Bowling of the Putnam County Sheriff's Office said Wednesday.

The police must "assume abduction," he said, adding, "All the answers to why you'd want to take a 5-year-old are ugly."

Haleigh's mother, Crystal Sheffield, shook as she spoke Thursday near the search area. Sheffield's mother, Marie Griffis, said that she and her daughter are devastated. "It's like I've got a hole in my body, and she feels helpless because she can't do anything but sit here."

A nationwide Amber Alert says the girl was last seen wearing a pink shirt and underwear.

Croslin is staying with relatives as the investigation continues, said Bowling, describing the girlfriend as a "child herself."

Griffis said that her daughter and Ronald Cummings had a "rocky relationship" and that the two took turns spending weekends with their daughter.

It's unclear if Sheffield and Cummings were ever married, but they are "legally separated," police said Thursday. Authorities were unable to answer media questions about how and why Cummings had custody of Haleigh.

Sheffield lives near the Florida-Georgia line and has been interviewed by law enforcement, according to police.

Investigators are looking into various angles of the case, including finding out the location of 44 registered sexual offenders who live within a five-mile radius of the Cummings home, said Lt. Johnny Greenwood of the Putnam County Sheriff's Office.

Police are offering but not requiring all those interviewed in the case to take polygraph tests.

A familiar face from the Caylee Anthony case is involved in the search. Bounty hunter Leonard Padilla joined the hunt Tuesday and is offering a $25,000 reward for the girl's return.

Padilla initially bonded out Caylee's mother, Casey, who has been charged with first-degree murder in the toddler's death, and then helped launch one of several searches for Caylee.

Anyone with information is encouraged to call the Putnam County Sheriff's Office at 386-329-0800 or the Florida Department of Law Enforcement's Missing Endangered Persons Information Clearinghouse at 888-FL-MISSING.

All About Orlando (Florida) • Missing Children