WASHINGTON (CNN) -- An Ethiopian immigrant with a history of mental health problems is in custody after being accused of mailing a letter with HIV-tainted blood to Barack Obama when he was president-elect, according to court records. 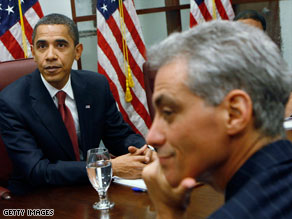 Saad Bedrie Hussein told investigators that he is an admirer of Obama and that the letter -- containing his photo, an admission ticket to Obama's election night victory party in Chicago's Grant Park and six index cards containing writing and reddish stains -- was his way of seeking government help and tickets to Obama's inauguration.

Hussein, who has HIV, said he "purposely cut one of his fingers with a razor so he could bleed on the letter," according to an affidavit by Terry L. Cullivan, an investigator with the U.S. Postal Inspection Service.

The letter, postmarked December 27 and written in an Ethiopian language, was addressed to Obama at the Illinois Department on Aging in Springfield, Illinois. When the letter was opened two days later, it was found to contain an orange powder, Cullivan said. A state employee then took the letter to another state office, resulting in a two-hour lockdown of the building, affecting more than 300 people, the affidavit says.

During an interview, Hussein was unable to remember what the orange powder was, but tests revealed it to be a drink-mix powder, the affidavit says.

According to the affidavit, during a December 29 interview, Hussein denied mailing any additional letters.

But, the affidavit said, two days later, the Illinois Department of Revenue notified him it had received two similar letters, both with Hussein's return address. One was addressed to the Illinois Department on Aging, and the second to "Emanuel," which investigators believe was intended for Obama aide Rahm Emanuel. Both letters contained what appeared to be dried blood and an orange powder.

The criminal complaint filed in the U.S. District Court in Illinois alleges that Hussein "knowingly mailed" the letters containing HIV-infected blood "with the intent to kill or injure another."

In January, a federal judge ordered a mental evaluation of Hussein, saying "there is reasonable cause to believe [Hussein] may ... be suffering from a mental disease or defect rendering him mentally incompetent [and] unable to understand the nature and consequences of the proceedings against him."

According to court records, Hussein was arrested March 29, 2006, by Chicago police after setting a fire in the middle of a Chicago intersection, waving a Quran in the air and yelling "Allah[u] Akbar" -- Allah is great -- and other words. Hussein "created a standstill in the traffic and refused to comply" with police commands, Cullivan's affidavit says.

U.S. Postal Service Inspector Peter Rendina said this is the second known case in which a person is alleged to have sent HIV-tainted blood through the mail for malicious reasons. In the other case, which is ongoing, a man sent blood to a person he thought was a business associate.