LONDON, England (CNN) -- A motorcycle gang carried out a bold smash-and-grab raid on a jewelry store in the center of London -- right in front of a CNN camera. 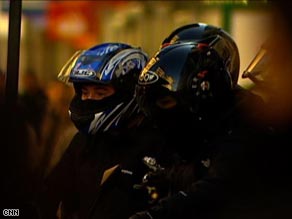 One of the raiders can be seen clutching stolen watches as the gang makes its getaway.

CNN reporter Sasha Herriman and cameraman Peter Kavanagh were filming in Oxford Street, London's busiest retail area, when the raiders took a sledgehammer to the store's windows in broad daylight.

Kavanagh kept the camera rolling as the thieves helped themselves to handfuls of luxury watches before roaring off on their motorcycles, leaving a crowd of stunned shoppers in their wake.

"They always tell you to expect the unexpected when working in news, and this certainly was unexpected," said Kavanagh, an Australian cameraman with 19 years' experience.

Images from the daring heist »

"As we were filming we heard a couple of motorbikes revving their engines loudly and saw a crowd forming. We couldn't tell what was happening at first.

"We saw the men yelling at the crowd and gesturing for them to stay back. Then they ran out of the store, climbed on their bikes and sped off."

Kavanagh says the daring heist nearly came unstuck at the last minute when the riders were forced to swerve to avoid a truck pulling into the road -- a moment he caught on film, along with a tantalizing glimpse of their booty.

Watch raiders zoom away on motorcycles »

"As they went past, I zoomed in to get a clear shot. I noticed one of the passengers on the bikes was carrying a fistful of watches."

London's Metropolitan Police would not reveal the value of the items taken from the store, but said they were trying to establish if it was linked to other smash and grabs.

No one has been arrested in connection with the raid, they said, and witnesses were being sought.

Says Kavanagh, after the four raiders had fled, punching the air with victory signs, so did many of the passers-by who saw it happen.

"Afterwards we went over to the store and saw the glass from smashed cabinets and the sledgehammer lying on the ground. Most witnesses cleared off, but a few who had taken photos came forward."