MADRID, Spain (CNN) -- Spanish police arrested a man arriving at Barcelona's airport from Chile after determining that the cast on his fractured left leg was made of cocaine, the Interior Ministry said in a statement Friday. 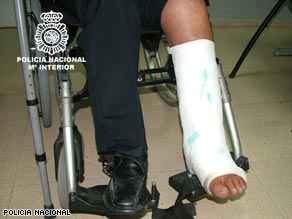 Police say the leg cast was made out of cocaine.

The 66-year-old Chilean man had an actual fracture of two bones below the knee, but the police suspect that he, or accomplices, may have intentionally fractured it, so that the cocaine cast could be applied.

The plan, police say, was to get past police controls because of the leg cast, meant to elicit sympathy, but also to have a real fracture in case police decided to X-ray it.

Police were scrutinizing passengers arriving on the flight late Wednesday from the Chilean capital, Santiago, when they became suspicious of the man. They quickly discovered cocaine hidden in his luggage, in a six-pack of beer and also in the aluminum legs of two stools he was transporting.

Then they applied a substance to the cast, which showed that it was made of cocaine, the statement said.

The suspect, identified only by his initials J.S.P.F., was taken to hospital to have his leg properly treated. He remains there, under police guard, a police spokesman told CNN.