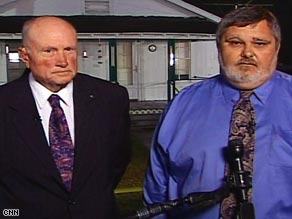 CNN "American Morning" anchor Kiran Chetry spoke with the mayors of the two towns on Wednesday. They are Mayor Wynnton Melton of Geneva, Alabama, and Clay King of Samson, Alabama.

Kiran Chetry, CNN anchor: Police have identified the gunman who they say went on a killing spree in southern Alabama yesterday afternoon. They say Michael McClendon murdered 10 people, including his own mother, his grandparents, an aunt, an uncle, along with a sheriff's deputy's wife and child. And these are crime scenes now spread out across two small towns this morning. And their mayors join us now, Wynnton Melton of Geneva, Alabama, and Clay King of Samson, Alabama.

Mayor King, let me start with you. ... You knew all of the victims and also the shooting suspect who took his own life as well. What can you tell us about the situation this morning, Mayor King?

Mayor Clay King, Samson, Alabama: Well, the whole community is still in shock. Like I said, we know, I personally know everyone that is involved, both the shooter and the victims. And that makes it more difficult to have to deal with.

Watch the mayors talk of the tragedy »

Chetry: And Mayor King, you say you coached him, along with your own sons in T-ball, in Little League, and that you would have never had any idea that he could have done something like this. Is there any motive that people are talking about this morning?

King: No, ma'am. At this time, I don't think anybody has any idea of what the motive is. And yes, I did. I coached the shooter's -- I coached him in both T-ball and in Little League baseball along with my two sons.

Chetry: And Mayor Melton, I want to ask you about this situation. I mean, this turned -- it appears from the beginning, this shooter targeted people within his own family. After that, it turned into really a random shooting spree. He had a semiautomatic, according to police, and he was firing at random until the sheriffs were able to corner him at this place of business. What are you learning about just how dire the circumstances were and how law enforcement was able to respond the way they did?

Mayor Wynnton Melton, Geneva, Alabama: That is correct. And the response was very quick. He was intercepted in Geneva by one of our officers, and then the chief of police arrived at the scene. Both of those received fire from the assailant. The chief of police was nicked in the arm, not very seriously.

The pursuit went on to the metal fabrication plant, Reliable, where an exchange of gunfire occurred in the parking lot. The suspect went into the building and took his own life there inside the building, which probably had around 400 people working at the time. But no injuries there at all, in the building. He took his own life at that point.

Chetry: And Mayor King, it's also just so ironic that one of the sheriff's deputies who was actually responding to the call of this emergency going on, it was his wife and one of his children killed, and his second child also airlifted to a hospital in Florida. What is going on with that situation? How did that family become involved in any way in this shooting?

King: They just happened to be over across the street visiting with the family.

Chetry: The family, the grandfather, grandmother, uncle and aunt who were out on the porch?

Chetry: So, just an unfortunate circumstance. So, besides his family, you guys are investigating this, or your authorities are, as a random act? I mean, I know that this is going to be tough for you guys because these crime scenes are spread out over both towns, so many different locations. How are you tackling this?

King: Well, we're very fortunate. We received a call from the governor this afternoon. And they have -- we've got the department of public safety here, ABI, ABC, FBI. We've got surrounding agencies that have come over to assist us. And that's how we're, you know, handling it. ABI is actually leading the investigation at this time.

Chetry: And Mayor Melton, how's the community reacting to this news? I'm sure they are learning more details, and it just gets more horrific as you find out how many people lost their lives.

Melton: It's still in shock. I think the community is handling it very well. But they're still in shock. We just feel here in our rural, Southern comfortable communities that things like this just don't happen. But unfortunately, they do.

And that's the major topic of discussion, that we are not shielded. Being small doesn't keep you from the problems of the rest of the world. And it's just a matter of comforting each other and a lot of discussions, a lot of prayers for the family here in Samson.

Chetry: Absolutely. Our prayers are with you guys, too. A real tough morning there. Mayors King and Melton, thanks so much for joining us this morning.