(CNN) -- Anna Nicole Smith's longtime partner and attorney Howard K. Stern and two doctors were charged Thursday with conspiring to furnish drugs before her death in 2007, according to the Los Angeles County District Attorney's Office. 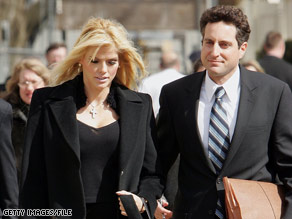 Smith, 39, was pronounced dead February 8 after being found unconscious in her hotel room at the Seminole Hard Rock Hotel & Casino near Hollywood, Florida.

The former Playboy playmate and reality TV star died from an accidental overdose of prescription drugs. At the time of her death several prescription medications -- both in Smith's name and that of her partner and lawyer, Stern -- were found in the room.

Stern, 40, and doctors Sandeep Kapoor, 40, and Khristine Eroshevich, 61, were each charged with eight felonies, including conspiring to furnish controlled substances, unlawfully prescribing a controlled substance and obtaining fraudulent prescriptions between June 2004 and January 2007 -- only weeks before the playmate's death.

All three were charged with one count of "prescribing, administering or dispensing a controlled substance to an addict."

Smith was buried in the Bahamas March 2 next to the grave of her son, Daniel, who died in September, shortly after the birth of her daughter, Dannielynn.