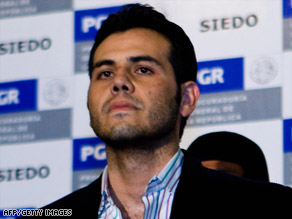 Zambada is the son of Ismael Zambada García, known as "El Mayo." The elder Zambada is a top lieutenant in the Sinaloa cartel, headed by Joaquin "El Chapo" Guzman, officials said.

Guzman, the alleged cartel leader who escaped from a Mexican prison in 2001, was named in this year's Forbes magazine report on the world's billionaires. He ranked 701.

Authorities on both sides of the U.S.-Mexico border blame Sinaloa and other cartels for a surge in violence in the region.

A video on the Universal newspaper Web site shows a dark-haired Zambada and other men being led away in handcuffs. Zambada sports long sideburns, beard stubble, a black sports coat and a striped shirt.

CNN's Melanie Whitley contributed to this report from Atlanta, Georgia.