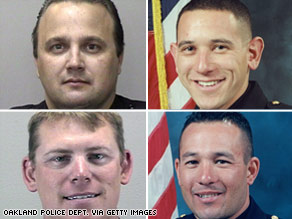 Initially, Oakland police spokesman Jeff Thomason said John Hege, 41, was the fourth officer to die after a man being pulled over in a traffic stop opened fire and then battled SWAT officers at a nearby building Saturday.

However, Thomason clarified later Sunday that Hege was pronounced brain dead about noon Sunday, but being kept on life support until a decision is made on organ donation.

The man who police said was the gunman -- Lovelle Mixon, 26, of Oakland -- was fatally shot in a gunbattle with SWAT officers in an apartment complex Saturday.

Police said in a late-night news conference Saturday that Mixon had an extensive criminal history and was in violation of parole for assault with a deadly weapon. He also had prior convictions in Alameda County for grand theft and possession of marijuana, the Oakland Tribune newspaper reported. The city of Oakland is in Alameda County.

The incident began about 1 p.m. Saturday in east Oakland when two motorcycle officers tried to pull over a car for a "fairly routine traffic stop," said Dave Kozicki, the deputy police chief.

Emergency call dispatchers then received reports that two officers were shot and needed help, he said. Those officers were Hege and Sgt. Mark Dunakin, 40, an 18-year veteran of the force, who died Saturday.

Soon after the first shooting, police began an intense search for the gunman. An anonymous caller directed authorities to a building on an adjacent street where the gunman was believed to be barricaded, acting Police Chief Howard Jordan said.

Those two slain police officers were Sgt. Ervin Romans, 43, and Sgt. Daniel Sakai, 35. Romans had been with the department since 1996; Sakai since 2000.

A fifth officer was grazed by a bullet. He was treated and released, Thomason said Saturday.

Watch the community give support »

"All four officers dedicated their lives to public safety and selflessly worked to protect the people of Oakland," Schwarzenegger said.

In honor of the officers, he said, flags at the state Capitol would be flown at half-staff.

CNN's Janet DiGiacomo and Faith Karimi contributed to this report.

All About Oakland Police Department