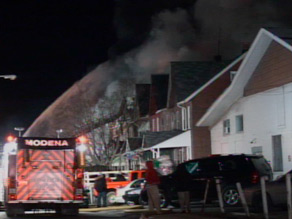 Coatesville has recorded more than 20 arson cases in 2009. Robert Tracey is held in two of the fires.

Coatesville has been hit by a string of arsons in recent months and although the arson task force investigating those cases made Monday's arrest, officials did not link the arrest to any other arson cases.

The criminal complaint against Tracey lists nine charges stemming from a fire set to a homeowner's porch swing and a fire set in another homeowner's trash can. The fires, both Friday night, were extinguished before any serious damage was done, authorities said. No injuries were reported.

Carroll said eyewitness accounts, including descriptions of the suspect's clothes, helped lead to the arrest.

Carroll said the arrest of a firefighter was "extremely troubling." He said the arson task force is working diligently to solve the arson cases and that "there is no more important investigation" to his office.

On January 23, Tracey, who was then an assistant chief of volunteer firefighters in Coatesville, told CNN affiliate WPVI that fighting multiple fires was "really taxing the fire department." Tracey recently became a paid firefighter with the department, according to Carroll.

Tracey was jailed with bond set at $2 million, Carroll said. He is expected to be arraigned March 30, according to Carroll. Tracey is the third person arrested this year in connection with arsons in Coatesville, which has recorded more than 20 arson cases so far in 2009.

All About Arson • Pennsylvania