LOS ANGELES, California (CNN) -- It's impossible to rule out the possibility that an actress committed suicide in music producer Phil Spector's home, and that he is being unjustly accused in her death, Spector's defense attorney told jurors in closing arguments Tuesday. 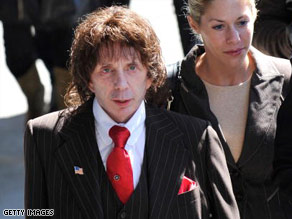 "This is a circumstantial-evidence case ... no one can tell you, 'This is what happened,'" Doron Weinberg told the jury of six men and six women. But, he said, Spector "did not kill Lana Clarkson, that's what the evidence shows."

Spector, 69, is charged with second-degree murder in Clarkson's death. The 40-year-old actress was found dead of a gunshot wound through the roof of her mouth in February 2003 at Spector's Alhambra, California, home.

A mistrial was declared in Spector's first trial in September 2007. After deliberating for a total of 15 days, jurors were unable to reach a verdict, telling Superior Court Judge Larry Paul Fidler they were split 10-2. An unnamed court official told CNN at the time that a majority of jurors voted for conviction on the second-degree murder charge, and jurors said two holdouts believed the defense's assertion that Clarkson's death could have been a suicide.

Prosecutors told jurors in closing arguments Monday that Spector was "a very dangerous man." deputy district attorney Truc Do told jurors Spector "has a history of playing Russian roulette with women -- six women. Lana just happened to be the sixth."

But Weinberg said everything prosecutors have done since 2003 is aimed at proving Spector killed Clarkson, and there was no "independent investigation" of the evidence. The prosecution, he said, was "so focused on making this a homicide" that everything they've done was an effort toward making that appear true.

The real question, Weinberg said, was whether prosecutors "unquestionably and clearly" excluded the possibility that Clarkson committed suicide. "On the basis of the evidence, you cannot say that has been excluded," he said.

Weinberg said he believes Spector is innocent, but even so, the only issue for jurors is whether "the government has proven their case beyond a reasonable doubt."

The case, he said, hinges on science. "The prosecution has a story. We are telling you about the facts."

In the 2007 trial, Spector's attorneys argued that Clarkson, who starred in 1985's "Barbarian Queen" and the 1987 spoof "Amazon Women on the Moon," was depressed over a recent breakup and grabbed a .38-caliber pistol to kill herself. Several people identifying themselves as Clarkson's friends testified for the defense, portraying her as a suicidal has-been despondent over her failing career. Clarkson was working as a VIP hostess at Hollywood's House of Blues at the time of her death

But prosecution witnesses painted Spector as a gun-toting menace. Five women took the stand to tell harrowing stories of Spector threatening them with firearms. Spector's driver testified he heard a loud noise and saw the producer leave the home, pistol in hand, saying, "I think I killed somebody."

Spector arrived at court Tuesday with his wife, Rachelle, on his arm. The courtroom was packed, with many disappointed spectators waiting in the hall for someone to give up their seat.

In the 1960s, he became famous as the man behind the "Wall of Sound," an instrumentally dense swirl of melody and percussion underlying such tunes as the Ronettes' "Be My Baby," the Righteous Brothers' "You've Lost That Lovin' Feeling" and Ike and Tina Turner's "River Deep, Mountain High." He later produced the Beatles' "Let It Be" album, John Lennon's "Imagine" and the Ramones' "End of the Century."

All About Lana Clarkson • Phil Spector