Former Nazi camp guard to be deported to Germany 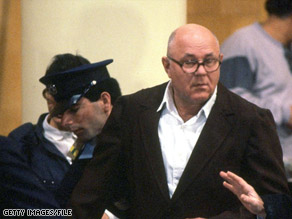 German authorities issued an arrest warrant for Demjanjuk on March 10, accusing him of being an accessory to 29,000 counts of murder as a guard at the Sobibor death camp from March to September 1943.

He is expected to arrive in Germany on Monday, Justice Ministry spokesman Ulrich Standigl said. Demjanjuk will turn 89 Friday.

Munich state prosecutors will question him with a view to bringing charges against him, they said in a statement on March 11.

German authorities studied an identification card provided by the U.S. Office of Special Investigations, and concluded it was genuine, before issuing the warrant, the statement said.

Demjanjuk denies having been a camp guard, saying instead he fought in the Soviet army and later was a prisoner of war held by the Germans.

Nazi hunter Efraim Zuroff of the Simon Wiesenthal Center told CNN that he was "thrilled" at the news of Demjanjuk's deportation, which has long been dependent on which country was prepared to accept him.

The United States Holocaust Memorial Museum also welcomed the news, saying in a statement it "applauds Germany's efforts to hold the perpetrators of Nazi crimes accountable."

"Almost 65 years after the Holocaust, this act sends an important message about the enduring need to make the perpetrators of genocide, wherever they are, answer for their crimes," the museum's statement said.

Demjanjuk has asked the Department of Justice for an administrative stay of the deportation order, his American lawyer John Broadley told CNN.

It could be "several months" after his arrival in Germany before Demjanjuk is brought to trial, his German lawyer, Guenther Maull, told CNN. Demjanjuk will be offered the chance to make a statement after his arrest warrant is read to him when he arrives in Germany, and then court procedures will begin, the lawyer said.

Demjanjuk will be kept either in Munich Stadelheim prison or a clinic, depending on his health, while awaiting the court's decision, said Maull, who added he has never spoken to Demjanjuk.

A retired auto-plant mechanic, Demjanjuk is originally from Ukraine.