Police: Husband saw wife with another man before killing kids

(CNN) -- A father who shot and killed his five children in their Washington state home before killing himself had argued with his wife over another man before the shootings, police said. 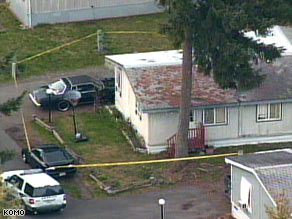 At the home, Harrison and the children held a family meeting with other relatives, Troyer said.

The relatives left, and later that night Harrison shot all five of his children -- four girls and one boy -- as they slept in their beds, Troyer said.

The children's mother was located after the shootings and was being counseled by a chaplain, Troyer said.

The family massacre comes just two months after a Los Angeles, California, father killed his wife, their five young children and himself after he and his wife were fired from their jobs.

And police are still investigating another family shooting last week, in which a Santa Clara, California, man gunned down six of his family members -- killing two adults and three children and wounding his wife -- before committing suicide.

All About Murder and Homicide • King County