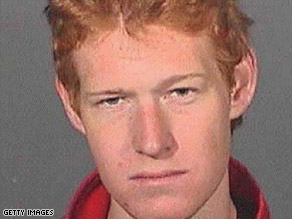 Redmond O'Neal was stopped at a jail security checkpoint, and volunteered he had drugs, police said.

The younger O'Neal was stopped during a routine search at a jail security checkpoint and he volunteered that he had drugs in his possession, said Steve Whitmore, a spokesman for the Los Angeles County sheriff's office.

All About Redmond O'Neal