(CNN) -- Two people were shot and killed Friday at a community college in Dearborn, Michigan, in what police believe was a murder-suicide, an official said. 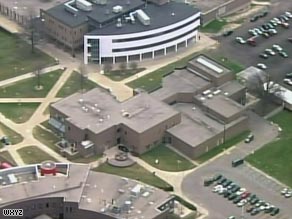 The Henry Ford Community College campus in Dearborn, Michigan, was locked down after the shooting.

A man and woman were found dead in a classroom building on the campus of Henry Ford Community College, Dearborn Deputy Chief Gregg Brighton said.

Investigators believe the man shot the woman but would not provide further information, Brighton said.

A shotgun was involved in the incident, which occurred in a classroom that was not being used, he said.

"We're in the very preliminary stages," Brighton said. "We've just made the scene safe. The crime lab is on the scene with detectives."

Police responding to a report of gunfire at the school had entered the south hallway of the Fine Arts Building when they heard another gunshot, Brighton said.

"We were in the building when we heard the shotgun blast, and when we finally got to that room, we had two deceased parties," he said at a news conference. "We believe this is a murder-suicide."

The campus was briefly in lockdown and will remain closed for the rest of the Friday, a school official said.

The school's emergency system immediately notified students, faculty and staff about the shooting via e-mail and cell phone, said Marjorie Swan, vice president and controller of the college.

"Our hearts go out to the family and the friends of the young woman who lost her life today," Swan said.

All About School Shootings • Dearborn (Michigan)