Alabama shooter: 'People who made us suffer will pay'

(CNN) -- An Alabama man who went on a shooting rampage in March, killing 10 people and himself, left a note saying he put his mother "out of her misery" and that "some of the people who made us suffer will pay," according to newly released police records. 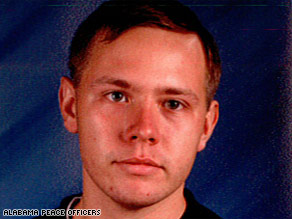 The shooter, Michael McLendon, killed his mother before killing nine others in several towns.

"Moma was very sick. Had lung cancer, I think," stated the letter police say was written by Michael McLendon.

"She wanted to die with her dogs and she did. I shot her while she was asleep. She never knew what hit her. Nor did the dogs. I'm sorry! But Moma had suffered enough. And so have I."

The letter, found in a relative's mailbox, was released earlier this week, along with a 25-page police summary and other documents. Police said they have no doubt the handwriting was McLendon's.

The 28-year-old Marine Corps and police academy washout shot his mother to death March 10 in Kinston, Alabama, then went on an hourlong rampage in neighboring Samson and Geneva.

Police also released 911 calls from people being terrorized by a smiling, unshaven man shooting at cars along Highway 52.

Among the dead were family members and strangers gunned down at random, police said. McLendon's letter offered only this explanation: "For me I've been miserable for a long time and can't take it no more. "

McLendon, 28, took his own life after his second shootout with police at a plant where he worked in 2003, Reliable Metal Products.

Authorities in Coffee County, Alabama, released their reports regarding the slaying of Lisa McLendon in response to a public records request by a local newspaper, the Dothan Eagle. The paper published the contents of Michael McLendon's letter on its Web site.

According to the police reports obtained by CNN, police found Lisa McLendon, 52, dead in her burning home, and soon learned her son was suspected of shooting and killing nine people in the neighboring county. It was not known if Lisa McLendon had lung cancer.

Lisa McLendon was shot through the head, from ear to ear. She was found lying chest down on a charred sofa, with her head turned toward the window. One of her small dogs, also dead, was placed by her head with its face pointing toward the window. Three other dead dogs were at her feet, the police reports said.

In his letter, Michael McLendon noted that his mother loved her dogs and being outdoors.

Her body was the last to be placed in the coroner's wagon, along with that of her son, other relatives and people she had never met, the police records said.

Two family Bibles found in the home yielded clues to the strong bond between mother and son. In one Bible bearing Michael McLendon's name, Lisa McLendon apparently wrote that the day he was born "was the happiest day of my life."

Another inscription was added later: "As Michael grows older, he becomes a more important part of my life. I never knew that I could love someone so much. I love you son."

The house reeked of gasoline and paint thinner, and partially burned rags were found on Lisa McLendon's body, the police reports said. Investigators found 41 DVDs focused on shooting and weapons, with titles such as "Deadly Effects: What Bullets do to Bodies," "Handgun Workout" and "How to Handle and Fire Fully Automatic Weapons."

On his rampage, McLendon was armed with two assault rifles, and two pistols and a shotgun were found in his car. Police said he fired more than 200 rounds.

Other evidence in the house provided clues to McLendon's thwarted dreams and growing resentment toward people he believed had wronged him.

A spiral notebook found on top of a magazine rack included two columns of names of people at places McLendon had worked over the years. It also included grievances such as someone reporting him for not wearing earplugs or improperly processing pork chops, the police report said.

Letters in the home showed McLendon's struggle to make it as a Marine. He wrote his mother, "Can't swim ... can't do enough pull-ups ... shoulder problems ... not making the grade."

He was discharged from Marine basic training in October 1999 for "fraudulent entry," according to records found in the house. He apparently failed to disclose a chronic shoulder dislocation.

In a warning letter, one superior officer wrote: "He needs to improve his physical strength and confidence. ... He does not appear mentally sharp."

He was hired as a police officer in 2003, but let go a month later for what police called "physical issues."

Other paperwork showed that McLendon quit his job at Kelley Foods the week before his rampage. He did not give a reason, but co-workers have said he did not like their nickname for him -- Doughboy.

It was his mother's suspension from her job that seems to have set him off. Police found paperwork on the kitchen table that indicated Lisa McLendon had been disciplined over misreporting hours, but that she could return to work on March 17.

"I was planning to put this off, but Moma got suspended," he wrote in his letter. "Wasn't her fault."