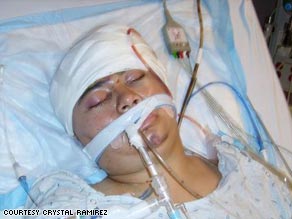 Luis Ramirez died of blunt force injuries after a confrontation with a group of Pennsylania teens.

However, a Schuylkill County jury found Brandon Piekarsky and Derrick Donchak guilty of simple assault stemming from the death of Luis Ramirez, who died of blunt force injuries to the head after a fight with the defendants and their friends.

Donchak, 19, was also found guilty of providing alcohol to the group of teens that encountered Ramirez the night of July 12 on a residential street in the rural mining town of Shenandoah.

Both teens were acquitted of ethnic intimidation charges.

Prosecutors alleged the teens baited the undocumented Mexican immigrant into a fight with racial epithets, provoking an exchange of punches and kicks that ended with Ramirez convulsing in the street, foaming from the mouth.

He died two days later in a hospital in Danville.

Piekarsky, 17, had faced a charge of third-degree murder for allegedly delivering a fatal kick to Ramirez's head after he was knocked to the ground. He also was found not guilty of ethnic intimidation, aggravated assault and attempting to solicit a cover-up.

An all-white jury of six men and six women heard from several prosecution witnesses, including a juvenile co-defendant and another teen who pleaded guilty in federal court for his role in the fight.

While the jury heard conflicting accounts about who initiated the encounter or delivered the final kick to Ramirez's head, defense lawyers attempted to place the blame on another co-defendant, who is facing charges in juvenile court, and Colin Walsh, who has pleaded guilty to violating Ramirez's civil rights.

The juvenile admitted on the stand to shouting "go home you Mexican [expletive]" after the first fight dispersed, prompting Ramirez to turn back and attack him.

The juvenile's testimony was corroborated by Walsh, who admitted to punching Ramirez and knocking him to the ground after he charged the juvenile.

Both witnesses said Piekarsky delivered the final blow to Ramirez's head while he was on the ground, but others testified that they couldn't be certain who had actually kicked him.

The incident drew national attention to the small town of Shenandoah, highlighting issues of race relations.

All About Pennsylvania • Hate Crimes • Murder and Homicide