MIAMI, Florida (CNN) -- A Florida state investigation has determined that 31 crosses on the grounds of a former reform school mark graves of teens and employees who died in a fire and an influenza outbreak. 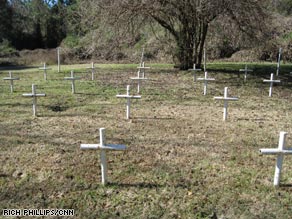 Crosses mark graves of reform school students killed in a fire and flu outbreak in the early 1900s, investigators say.

One grave even contains the body of a student who was slain by another student, the investigation found.

The five-month investigation by the Florida Department of Law Enforcement rules out claims by a group of reform school survivors that students who were beaten by guards are buried there.

The former students, now in their 60s, call themselves the "white house boys," after a concrete-block building where boys were taken for punishment. They said that they witnessed murders, and that students suddenly disappeared after they suffered severe beatings at the school, in Marianna, Florida, in the 1950s and '60s.

The men believed the graves, marked only by white steel crosses that are rusting with time, were those of the teens who were beaten and killed by reform school workers and administrators.

But authorities found documents that pointed to the fire and the flu outbreak. They said they plan no exhumations.

"This is our conclusion, based on what we know today," said Mark Perez, the chief of investigations for the Florida Department of Law Enforcement.

"Enough information has been corroborated on who is buried there. We went and identified all of the individuals who perished while in custody," he said.

The FDLE released its results in an 18-page investigative report. It says that no information confirms that any of the administrators or workers at the facility contributed to the deaths of any of the students.

Their investigation into the charges of physical abuse, made by the former reform school students, continues.

However, the investigators concluded that claims by the former students of slayings and disappearances of boys could not be corroborated.

"None of the former students were able to provide any first-hand information which would have identified any of these alleged victims, or the persons responsible for their purported demise," the report states

Roger Kiser is one of the former students who pushed for the investigation. He's written a book on the alleged abuse at the school and says that the FDLE has yet to contact him, despite, he says, witnessing two deaths at the school.

"My personal feeling is that the State of Florida does not want to know the truth. It is just too horrible a tragedy for the general public to learn about," he wrote in an e-mail to CNN.

Florida's governor, Charlie Crist, had ordered an investigation to determine who is buried in the 31 unnamed graves.

The graves are in a secluded area on the property of what was the Florida School for Boys in Marianna, a town near the Georgia border.

The FDLE says that records have determined that the cemetery was known to everyone back in the early 1900s, and the details got lost in time.

"There was enough information available to establish their identities and the cause of death," said Mark Perez of the FDLE.

However, the FDLE has not been able to determine why the graves are not marked with headstones or any other identifiers.

"That's the million-dollar question. We can't find any records why they weren't marked," he said.

But records have determined that the remains are those of boys who died in a fire at the reform school in 1914. Many of these victims were orphans and indigents whose families could not afford to have the bodies shipped home. And so, the FDLE said, they were buried at the school.

According to the FDLE, among the remains are those of one reform school boy who was slain by another student. Other graves are those of pets.

The deaths were reported extensively in local news coverage, and even in a newsletter that was published, at the reform school, called "The Yellow Jacket."