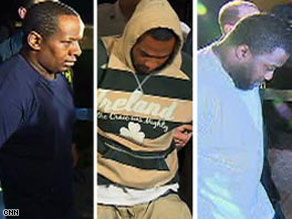 Three of the suspects are taken away by authorities after the arrests were made.

The plot ended with federal agents and New York police using an 18-wheel truck to block the vehicle containing the suspects after they planted what they believed were explosive devices in cars near the synagogues Wednesday night, said New York City Police Commissioner Raymond Kelly. The devices were duds.

All four suspects are accused of plotting to detonate explosives near two synagogues in the Riverdale section of the Bronx and seeking to fire missiles at planes at an Air National Guard base. Kelly described the plot as homegrown, with no known links to any foreign or domestic groups.

The plot was uncovered in a yearlong investigation involving an FBI informant, authorities said.

At a court hearing Thursday, three of the suspects -- James Cromitie, David Williams and Onta Williams -- shook their heads as prosecutors appealed to U.S. Magistrate Lisa Smith to order them held without bail. Prosecutor Eric Snyder described the suspects as violent men "eager to bring death to Jews."

Smith ordered the three to remain in custody without bail until their next court appearance on June 5. Smith also approved a request by Cromitie, accused of being the ringleader, for medical care for cuts he said he received from flying glass during the arrest.

After the hearing, Cromitie's lawyer, Vincent Briccetti, declined to comment on the case.

At a later hearing, the fourth suspect, Laguerre Payen, also was remanded without bail. Payen received medical treatment for injuries he suffered during the arrest and had a bandage over one eye at his hearing. Payen's lawyer said her client had a history of mental instability, but Snyder, the prosecutor, said videotapes of the suspects showed Payen to be a coherent and willing participant.

Cromitie, David Williams and Onta Williams are U.S. citizens, while Payen is a Haitian, according to the New York governor's office. Police said three of the suspects have prior criminal records and all were believed to consider themselves Muslim.

Mayor Michael Bloomberg praised the work of his city's police department and federal authorities in uncovering the alleged plot.

"The good news here is that the New York Police Department and FBI did exactly what they're trained to do and prevented what could have been a terrible event," Bloomberg said. "We have to constantly be vigilant."

At the targeted sites on Thursday, worshippers said they were relieved that the plot was halted, but they didn't intend to change their daily routines.

"Unfortunately, this is the world we live in," said Nurit Bacharach of the Gan Miriam Early Childhood Center at the Hebrew Institute in Riverdale. "We just have to forge ahead and keep a positive mind and live life and just be cautious and aware."

According to New York and federal authorities, an FBI informant met with Cromitie in June 2008 in Newburgh, New York. During that meeting Cromitie said his parents lived in Afghanistan, he was angry about the U.S. war there, and he had an interest in "doing something to America."

The four suspects began meeting and plotting to bomb the synagogues with the informant at a home equipped with concealed video and audio equipment, authorities said.

The suspects also conducted surveillance, including photographs, of an Air National Guard base where they wanted to blow up planes, authorities said. The informant provided the men with a surface-to-air guided missile and C-4 plastic explosives, none of which could actually be used.

"No one was at risk," said Kelly, the police commissioner, describing the explosive devices as duds created to dupe the suspects.

Kelly said that after the suspects planted the 37-pound devices in two cars, a waiting contingent of officers pulled an 18-wheeler across the road to block the suspects' vehicle and then smashed their windows to apprehend them without a struggle.

The charges against the men include conspiracy to use weapons of mass destruction in the United States and conspiracy to acquire and use anti-aircraft missiles. The charges carry a maximum sentence of life in prison.