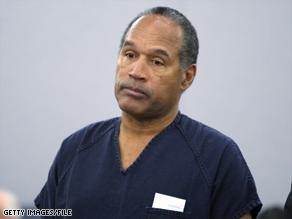 O.J. Simpson is appealing his conviction for charges including kidnapping and armed robbery.

A jury in October 2008 convicted Simpson, 61, on charges including armed robbery and kidnapping.

He was sentenced in December to serve a term of up to 33 years in prison, with eligibility for parole after nine years.

In the 47-page brief filed Tuesday, Simpson's attorneys accuse Clark County, Nevada, District Judge Jackie Glass of judicial misconduct, saying her behavior constituted "cumulative error that was so egregious and prejudicial that the defense could not get a fair trial."

In addition, she would not allow defense counsel to ask prospective jurors about their "known and unknown" biases, the brief said, and allowed prosecutors to strike the only two African-American potential jurors eligible to be on the jury.

"Because of the unique nature of the case, a full and complete questioning of potential jurors needed to take place," the appeal said. "The District Court gave no deference to the fact that Simpson brought a lot of baggage into the courtroom."

Simpson's conviction came on October 3 -- the 13th anniversary of his controversial acquittal in the 1994 killings of his ex-wife, Nicole Brown Simpson, and Ronald Goldman.

The former Heisman Trophy winner, record-setting NFL running back and movie actor had enlisted the help of Clarence "C.J." Stewart and four others in an effort to get sports memorabilia items that Simpson claimed had belonged to him from dealers Bruce Fromong and Al Beardsley.

The six men confronted the dealers in a room at the Palace Station Hotel Room and Casino in Las Vegas on September 13, 2007, brandishing weapons but not firing them.

Four of the men testified against Simpson, while Stewart stood trial alongside him. The four received probation in exchange for their testimony; Stewart received a sentence similar to Simpson's, but will be eligible for parole in seven and a half years.