NEW YORK (CNN) -- A police officer chasing a theft suspect was fatally shot Thursday night by another officer after he failed to drop his weapon when ordered to, authorities said. 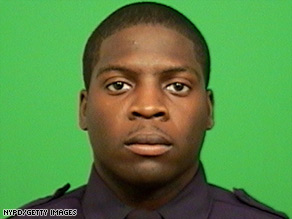 Officer Omar Edwards, 25, was not wearing a bulletproof vest and did not fire a shot, authorities say.

Edwards was in plainclothes and carrying a handgun as he chased the suspect past a police car.

Authorities said the officer who shot him said he didn't realize Edwards was a police officer.

Edwards had just left the Housing Bureau Station House on East 124th Street, said Police Commissioner Raymond Kelly at a news conference Friday. As Edwards approached his vehicle, he saw a man rummaging through it.

Meanwhile, a police cruiser with a sergeant and two officers, including Officer Andrew Dunton, had just turned onto 125th Street from 1st Avenue.

Santiago ran in front of the unmarked vehicle as it approached halfway up the block and the vehicle stopped.

The officer in the front passenger seat got out of the vehicle and shouted for Edwards to stop running and drop his weapon.

According to Kelly, the officers reported that, after the command was given, Edwards turned toward Dunton with his gun in his hand.

Dunton fired his Glock 9 mm six times, hitting Edwards three of those times -- once in the left arm, once in the left side and once in the back, according to police. Emergency crews responding to the scene found Edwards wearing a police academy T-shirt under his clothes and found his police shield and ID in his front left pants pocket, according to Browne.

Edwards, who lived in Brooklyn, was recently married and had two small children, according to CNN affiliate WABC-TV in New York.

On Friday, his relatives remembered him as a good person who achieved what he set out to do.

"He was a wonderful, wonderful child from when he was small," his father, Ricardo Edwards, told WABC.

"His desire was always to be a policeman and to play football," his uncle, Jerome Harding told the New York TV station. "And he did accomplish both, because he plays for the Police Department."

Edwards was pronounced dead at Harlem Hospital at 11:21 p.m. Thursday, according to Kelly.

"Tragic accidents like this are another reminder of the dangers our police officers often face as they keep our city the safest big city in the nation," Mayor Michael Bloomberg said Friday.

"Rest assured we will find out exactly what happened here, see what we can learn from it so it may never happen again. All the city's prayers are with Omar Edwards and his family."

Five eyewitnesses, along with 20 people who reported hearing gunshots, were interviewed by police.

The officer who fired the shots has 4½ years' experience, authorities said.

The officers involved have been placed on administrative duties while the shooting is investigated. Police later arrested the alleged thief on suspicion of breaking into Edwards' car.