MIAMI, Florida (CNN) -- A teenager accused of killing and mutilating 19 pet cats in Miami, Florida, has been released on bond and is under house arrest, authorities said Wednesday. 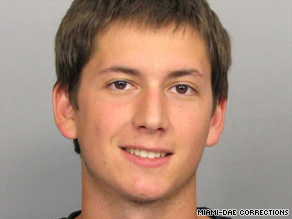 Tyler Weinman, 18, was fitted with an ankle bracelet for electronic monitoring and escorted home by Miami-Dade Police. He also has been charged with improper disposal of dead animals and burglary in the monthlong cat killing spree.

Judge John Thornton ordered Weinman released after a court-appointed psychologist found the teen was mentally competent and not a danger to himself or others.

Weinman, who had been on suicide watch, flashed a quick smile to photographers and reporters as he entered the courtroom. He made no statements at the hearing.

"When the case starts to unfold, you'll see," he added. "The first thing that happened is an evaluation. He's not a danger. He's not a threat to himself or anyone else," Walsh said.

Weinman was ordered to undergo psychiatric counseling twice a week.

The teen was arrested at a party in Miami on Saturday night. Police allege he's responsible for the vicious series of cat killings that has put the manicured neighborhoods south of Miami on edge. Some of the carcasses were posed, police said.

Thornton ordered the court file sealed. Investigators said Weinman might have been part of a ring committing the crimes.

"This is an ongoing investigation. We're looking to see if any other individuals are involved," said Terry Chavez, a spokesperson for the Miami-Dade State Attorney's office.

"Police say a lot of things," Walsh responded. "There obviously has been a public outcry to solve this crime, and that motivates police in certain directions. And now, this young man has to sit there and bear the allegations," he said.

Weinman was charged with 19 counts of animal cruelty with intent to harm and kill. He faces up to 158 years in prison if convicted of all counts. He was arrested after phone tips came in to police and he was placed under surveillance.

As he left court, the suspect's father, Douglas Weinman was asked if his son was guilty.

"Absolutely not," he said.

He also expressed his condolences to pet owners who lost their cats. "We are cat owners ourselves. We love our pets," he said.

"We certainly understand the grief that other cat owners are going through, and we sympathize with them, but it is not our son," he added.

"We've seen him play with our pets for years and he's a great kid and he plays with pets and he's fine with them," he said.

Extra police and a special investigator from the State Attorney's Office had been working the investigation, which had worried many residents who feared the cat killer might graduate to people.

One pet owner, Donna Gleason, said her family cat, Tommy, was "partially skinned" and left dead in her yard.

"Part of his skin was missing underneath ... and part of his legs," she said.

But Weinman's defense attorney said the police have not gotten their man. "He's not a violent kid. He's just a good kid who's a victim of circumstance. He did not do this crime," Walsh said.

Weinman is due back in court July 6 for arraignment.