NEW YORK (CNN) -- Before Adam Walsh, Etan Patz and Madeleine McCann, before the first Amber Alert, before a young face stared back from the side of a milk carton, there was Danny. 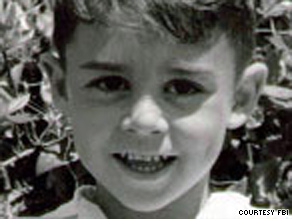 Danny Barter was 4 when he vanished in 1959 while on a family camping trip.

Danny Barter vanished in 1959. He was on a family camping trip to Alabama's Perdido Bay. He was playing with his dad one minute, gone the next. "Just like that," recalled his brother Mike Barter.

Last weekend, his loved ones returned to the campsite and to the scene of the presumed stranger abduction. They came to remember Danny and to rededicate a half-century mission to find him.

Even with the passage of time, their faith has not wavered.

"We've never doubted that he's ... out there," Mike Barter said. "Until they prove otherwise, we hope one day we will be reunited."

Their hope has been bolstered by investigators with the FBI and the Baldwin County Sheriff's Office, which reopened the case last year after hearing of a recent conversation.

"A lead was sparked when someone was sitting in a public area talking about what happened," FBI spokeswoman Joyce Riggs wrote in an e-mail to the media.

As cold case cops know, a wisp of a lead can turn into a big break, a fact FBI Special Agent Angela Tobon believes can solve the Daniel Barter mystery.

"Even if [people] think it's insignificant, it's probably not," Tobon said. "Each little piece of the puzzle may not mean something, but when you put it all together, you get the big picture."

Danny was the third youngest of Paul and Maxine Barter's seven children. He had brown hair and big brown eyes.

"He's such a very pretty and sweet child," his mom told the Mobile Register in an article published June 21, 1959. "I can understand why someone would want to take him, because he's such a pretty child."

Three days earlier, Danny, his parents and his siblings were enjoying a family outing near the Gulf shore. Danny and his dad had just returned from getting some drinks at a store. Tents were pitched. Fishing poles were prepared. And then someone noticed that Danny was gone.

"I had first believed that despite Danny's fear of water, he had wandered into the water and drowned," Maxine Barter told the Mobile Register. "But not now. I believe he probably walked up the road, and someone picked him up."

The search was extensive and immediate. Hundreds combed the land and the waters, looking for Danny. Bloodhounds were given his scent and dispatched to follow it. Alligators were killed and cut open.

But there was no trace of Danny, then or now.

For his parents and the police, the sickening conclusion was quickly reached: He was stolen by a human predator.

Danny's mom could not fathom that the kidnapper would bring harm to her boy.

"I hope now that someone did take Danny, because I know if anyone wanted him bad enough to kidnap him, they would take good care of him," she said.

Fifty years later, the family longs for closure. Paul and Maxine Barter are both deceased, but their children carry on the decades-long pursuit to know the truth.

On dannybarter.com, a Web site dedicated to finding answers, the family posted this plea to the public:

"We strongly believe that someone out there knows what happened to Danny and possibly knows him as another identity. We hope to find him safe and sound."

The FBI is also seeking information on Danny Barter. It has published two photographs of him on its Web site. One shows the smiling child, taken in the months before Danny was abducted. The other picture is age-progressed, depicting what Danny would look like today at 54.

If you have any information on the Danny Barter case, go to dannybarter.com or contact the FBI, your local police or the Baldwin County Sheriff's Office in Alabama.

All About Missing Children • Kidnapping • Federal Bureau of Investigation