(CNN) -- Five of the six black high school students charged with attempted murder in 2006 for allegedly beating a white classmate pleaded no contest in a Louisiana court Friday, closing the book on a racially charged case. 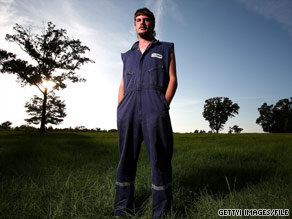 Terms of the settlement include restitution to Justin Barker, shown here in 2007 in Jena, Louisiana.

The men agreed to plea deals that settled lawsuits filed against them by Justin Barker and his family the year after the December 4, 2006, incident in the town of Jena, population 3,000. The case was referred to as the "Jena Six."

An underage boy also allegedly was involved in the case, but was not named as one of the attackers.

Each man, excluding Theo Shaw, was fined $500, must pay $500 in court costs and will have seven days of unsupervised probation. They also were ordered to pay restitution to Justin Barker and to have no contact with the Barker family.

The $500 fine was waived for Shaw because of the almost seven months he has spent in jail.

According to Barker's mother, Kelli, her son was taken to a hospital with cuts and with injuries to his eyes and ears after the assault. His right eye had blood clots, she said.

Parents of the Jena Six say they heard Barker was hurling racial epithets, but Barker's parents insist he did nothing to provoke the beating.

In the settlement, the Barkers received an undisclosed amount of money. The family also had sought to retain the right to sue the school board and to receive a percentage of any profits the youths might receive in the next five years from book or video deals, family attorney Henry Lemoine Jr. told CNN before the hearing.

After the charges triggered protests from critics who said they were too strict, a judge reduced the charges against Shaw, Jesse Ray Beard, Robert Bailey Jr., Carwin Jones and Bryant Purvis to battery and conspiracy.

The sixth defendant, Mychal Bell, pleaded guilty in December 2007 to a misdemeanor second-degree battery charge and was sentenced to 18 months in jail.

At the hearing, attorneys representing the five men read a statement expressing sympathy to the Barkers and acknowledging that Justin Barker did not use a racial slur. They also apologized to the residents of Jena for the uproar caused by the case.

"They are pleased with the settlement. The settlement is under a gag order," the Barkers' lawyer, Henry Lemoine Jr., said after the hearing. "Hopefully, all the wounds that were opened will now be healed."

James Boren, an attorney for Bailey, added, "We're all proud of our clients, who are doing well."

"They're moving on with their life."