WASHINGTON (CNN) -- A Duke University official is accused of offering his 5-year-old adopted son for sex on the Internet, according to the FBI and court documents in the case. 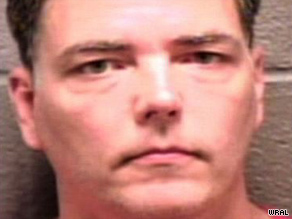 Frank M. Lombard, 42, was arrested last week at his home in Durham, North Carolina. During an Internet chat, Lombard allegedly offered the child to the person he was chatting with, who was a task force officer from Washington's Metropolitan Police, the FBI said in a statement.

The chat was initiated after a confidential source facing child pornography charges told authorities they had witnessed a man, allegedly Lombard, performing sex acts on a child over the Internet.

During the chat, according to the complaint filed against Lombard, he told the officer that he had performed multiple sex acts on the boy and that the officer could do the same if he came to Durham.

According to a transcript of the chat, reprinted in the complaint, Lombard allegedly told the officer that he had to hide the abuse from his partner and that he drugged the child with allergy medication.

Lombard was arrested June 24, and two children at the home, including the 5-year-old, were removed from the home by the North Carolina Department of Social Services, the FBI said.

The center is described on its Web site as a joint venture among the university's law, business and arts-and-sciences schools and "an instigator and facilitator of a broad range of research related to public health and the policies that address it."

Lombard faces federal child sex abuse charges, which carry a prison sentence of up to 20 years upon conviction, authorities said. He made an initial appearance in federal court in North Carolina but was transferred to Washington to face the charges there, court documents show.

Attempts to contact the Durham attorney who appeared in court with Lombard were unsuccessful Tuesday.