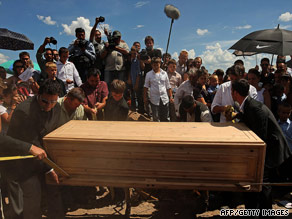 Mourners carry the coffin of Benjamin LeBaron, 32, on Thursday in the Mexican state of Chihuahua.

Gonzalez declined to name the suspects, other than to say they belong to a crime organization known as "La Linea" (The Line).

The toll booth cameras show four trucks or sport utility vehicles in which 12 suspects were riding, she said.

No arrests had been reported by Friday.

Benjamin LeBaron, 32, and his brother-in-law, Luis Widmar, who was in his mid-30s, were beaten and shot to death after armed men stormed into their home Tuesday morning in Galeana.

Arturo Sandoval, a spokesman for the Chihuahua attorney general's office, said earlier this week that a note was found on LeBaron's body but he could not confirm the contents.

Local media reported the note indicated the slayings were in retribution for the capture of 25 drug suspects in a nearby town.

LeBaron's younger brother, Eric, was kidnapped in May and returned unharmed a week later. The kidnapping prompted LeBaron to become a nationally recognized anti-crime activist who moved the local community to take a stand.

"There are no leaders here, or we are all leaders," LeBaron's brother Julian LeBaron told CNN affiliate KINT-TV in El Paso, Texas, this week. "If they kill my brother, another three will take his place. And if they kill us, another hundred will take their place. We are not giving up. No way."

The LeBaron brothers belonged to the "Community of LeBaron" in the municipality of Galeana, a township founded by ex-communicated Mormons.

All About Mexico • Chihuahua State • Shootings