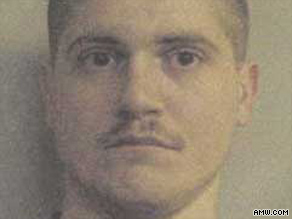 Micky Louis Mayon, one of the 100 most wanted people in the United States, was taken into custody in southern Tel Aviv after Israel received information from Interpol indicating he was there.

The Ku Klux Klan member was located during a secret operation by Israeli immigration authorities, said Sabin Hadad, a spokeswoman for the country's Interior Ministry.

He arrived in Israel in January 2008 on a one-month tourist visa, frequently changed apartments, and earned money by working part time at several restaurants, the ministry said.

Mayon, 32, is being held at Israel's Maasiyahu prison and is in the process of being deported, Hadad said.

"The search for Mayon came to a successful conclusion ... with the actions in Israel," Michael Regan, a U.S. marshal in Harrisburg, Pennsylvania, said Monday. "Locating and identifying Mayon in a foreign country sends a strong message that you can run, but you cannot hide."

Two U.S. marshals are being sent to Israel to escort him back to the United States.

Mayon was featured on the television program "America's Most Wanted." He is a convicted felon and is accused of setting a judge's car on fire in Pennsylvania, the show's Web site said.

All About Israel • Interpol • Pennsylvania