NEW YORK (CNN) -- A man who allegedly set off a small bomb at a Starbucks coffee shop was arrested after he made the mistake of bragging about his exploit to friends, police said Wednesday. 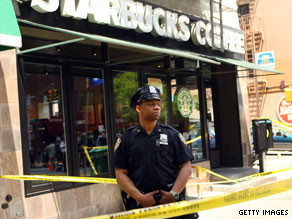 An NYPD officer stands guard outside a Starbucks where a bomb went off on Memorial Day.

New York City Police Commissioner Raymond Kelly told reporters that Kyle Shaw, 17, was arrested Tuesday night at his Manhattan apartment after a police investigation revealed that he bragged to his friends about planting the explosive outside an Upper East Side Starbucks on May 25.

Shaw allegedly told his friends prior to the explosion that "Project Mayhem" was about to begin, Kelly said, and that they should watch the news on Memorial Day.

Shaw was a fan of the movie "Fight Club" and imitated Brad Pitt's character from the film, the police commissioner said -- although he apparently failed to adhere to Pitt's famous line in the film: "The first rule of Fight Club is, you do not talk about Fight Club." The movie, released in 1999, also includes a scene in which a Starbucks is destroyed.

Kelly said there is no evidence at this time to suggest that Shaw was behind other recent small explosions in the city, such as the bombings at the Times Square Army recruiting center and the Mexican consulate.

Shaw made the small explosive out of a plastic bottle, firework powder, a metal cap and electrical tape, Kelly said.

The blast, at 3:30 a.m. on Memorial Day, damaged a nearby bench and shattered the store's windows, the commissioner said.

No one was injured in the explosion, but the bomb was powerful enough to have caused serious injuries if anyone had been nearby, Kelly said.

Shaw has been charged with arson, criminal possession of a weapon and criminal mischief, he added.