(CNN) -- The president of Liberia spoke Friday on the sexual assault of an 8-year-old Liberian refugee in Phoenix, Arizona, decrying reports that the parents believe their family has been shamed by the girl. 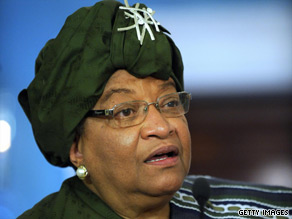 President Ellen Johnson Sirleaf says the girl, her family and the alleged rapists should receive counseling.

"This is not a question of shame on the family. It is the question of an assault on a young child. That cannot be tolerated," said President Ellen Johnson Sirleaf, speaking by telephone.

Police have charged four boys, ages 9 to 14, in the case. The boys also are Liberian refugees.

"We are so saddened," Sirleaf said. "We are deeply distressed at this behavior on the part of our young Liberians and very saddened at this 8-year-old child who has been so victimized."

Phoenix police say the boys used an offer of chewing gum to lure the girl to a storage shed at an apartment complex on July 16. There, they allege, the four boys restrained and sexually assaulted her.

Speaking from Liberia, Sirleaf said the family's reaction to the incident is wrong. "They should help that child who has been traumatized," she said.

She suggested the family members "need serious counseling because, clearly, they are doing something that is no longer acceptable in our society here."

She also called upon Phoenix authorities to counsel the alleged attackers. "They have to pay the penalty, but we also want to make sure that they are counseled ... that they will have an opportunity to change and become useful citizens, not only in the United States but when they return home."

Detectives said the girl was placed in the custody of Phoenix child protective services after the attack because of her parents' attitude toward her.

"The parents felt that they had been shamed or embarrassed by their child," Phoenix police Sgt. Andy Hill said Thursday.

Tony Weedor -- co-founder of the CenterPoint International Foundation, which aids Liberians in the United States and provides aid for those still in Liberia -- agreed with Hill. He said rape was not against the law in Liberia until 2006.

"The family [believes they] have been shamed by her ... and they're more concerned about that than the crime," he said.

Sirleaf said the family should not be concerned about that.

"Let me say very clearly that rape is a problem in Liberia also. There is a strong law regarding that," she said.

Milton Barnes, Liberia's ambassador to the United States, said he also will step in to help the victim.

"Our primary concern is this child," he said. "We intend to work with the authorities and the family to make sure she is safe, protected and there is certain sensitivity exercised towards her."

Edwin Sele, the deputy ambassador, also responded to the incident.

"Having heard the story myself, I'm outraged," he said. "In Liberia, the family and law enforcement officers would be embracing the victim. To hear that the family is not doing that, that should be an isolated case."

Hill said Thursday that protective services officers would "determine what's going to happen [to the girl] in the days ahead."

All About Phoenix (Arizona) • Liberia • Crime