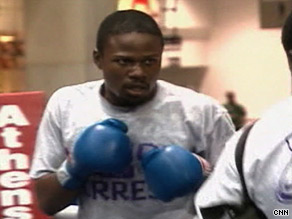 Police say they have no suspects in the death of former boxing champion Vernon Forrest.

An Atlanta police spokeswoman said it appeared that Forrest, 38, had been robbed, which led to a confrontation in which he was shot several times in the back.

Police had no suspects as of midday Sunday, said the spokeswoman, Sgt. Lisa Keyes.

Mark Guilbeau, senior investigator with the Fulton County Medical Examiner's office in Atlanta, said an autopsy will be conducted Sunday, and results are expected by afternoon.

He was named the World Boxing Hall of Fame fighter of the year in 2002, according to BoxRec.

All About Boxing • Murder and Homicide