(CNN) -- A sailor accused of killing another sailor was found dead in his cell in a southern California military jail, officials said Friday. 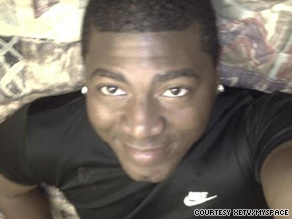 Seaman August Provost, shown on his MySpace page, was killed while on sentry duty at Camp Pendleton.

Petty Officer Jonathan Campos was found dead in the brig at the Marine Corps Base Camp Pendleton in San Diego, a military statement said.

The cause of death was self-inflicted asphyxiation, according to the statement.

Campos had been charged with murder in the June 30 shooting death of Seaman August Provost.

Provost was killed while he was standing guard as a sentry for the Assault Craft Unit 5 compound at Camp Pendleton, officials said. Authorities also said Provost's body was set on fire at his guard post.

Provost's family believed that he was killed partly because of his sexual orientation.

However, a spokesman for Camp Pendleton, where the shooting took place, said there was no indication early in the investigation that the killing was a hate crime.

Along with the murder charge, Campos was facing charges of drug use, larceny, burglary, theft, arson and unlawful handling of a deceased individual.

All About Murder and Homicide • Camp Pendleton