COLORADO SPRINGS, Colorado (CNN) -- Army Spc. Thomas Delgado saved lives as a combat medic on the front lines in Iraq, earning a Purple Heart when a bomb rocked his vehicle during his nearly yearlong tour. Back home, he was sometimes assigned the role of insurgent during combat training at a mock Iraqi village in California. 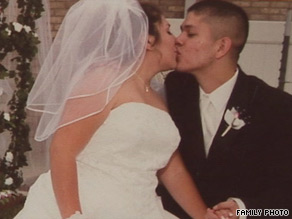 Thomas Delgado is charged with trying to kill his wife just days after their fifth wedding anniversary.

"He told me he felt like he never left" Iraq, said his wife, Shayla.

Soon after his return in December 2005, Delgado realized something many war veterans fail to recognize. He was suffering from post-traumatic stress and needed help. He complained of "fear of losing self control," "feelings of hopelessness" and "paranoia," medical records show.

The 25-year-old soldier is now at the center of a controversial attempted murder case, charged with trying to kill his wife in September 2008. She says prosecutors have it all wrong. Her husband of five years needs medical help, not prison. And, she says, he never tried to kill her.

Delgado's case may become one of the first to be heard at a soon-to-be-opened special veterans' trauma court in Colorado, if the family gets its way. The court was created to get professional medical care for military veterans suffering from trauma-related disorders who are accused of crimes. An estimated 20 percent of Iraq war veterans suffer from post-traumatic stress disorder.

Delgado's only previous run-in with the law was a minor traffic violation.

Delgado medically retired from the Army on Wednesday. He appeared at a hearing Thursday where he was released into the care of his father and will be monitored by an ankle bracelet while awaiting his November trial. Prosecutors have so far refused the family's request to move the case to the new veterans' court.

"I feel like it was 100 percent preventable," Shayla Delgado told CNN. "All we've really wanted this whole time was someone to help us, someone to give him treatment."

The district attorney's office, which covers El Paso and Teller Counties, declined to comment for this story.

Delgado praised his wife for standing by his side.

"I would definitely be another one of the lost causes if I didn't have her backing me up in my corner. She's just been amazing, doing amazing things on my behalf," he told CNN by phone.

"It's unfortunate that it took an incident like this to get proper treatment."

He said his lawyer advised him not to talk about the night in question. "I'm hoping to stay out of jail," he added.

For the Delgados, the evening of September 24, 2008, just days after their fifth wedding anniversary, began with drinks and an argument. Then everything escalated with whirlwind speed.

Shayla Delgado says her husband grabbed a gun and rattled off suicidal thoughts. "I've been thinking about how I'm going to do it," she recalled him saying. "I just can't live like this any more. I can't do it, I can't do it."

"He was telling me, 'Take our son and leave because you don't want to be here for this,'" she said, breaking down in tears. "I was really, really scared."

She says she pleaded, begged him, to get on the phone with his father. The two spoke. The soldier kept telling his dad how much he loved him, she says. She rushed to the bedroom, cradling their sleeping year-old son, and sprinted out of the apartment.

She dropped the infant off at a neighbor's and returned home, heading straight to the bathroom where her husband was holed up. She kicked in the door. "I see him with the gun in his mouth and I just ripped the gun from his arms and I ran."

It was during that scuffle to wrestle the gun away, prosecutors say, that the soldier tried to kill his wife, breaking her nose and attempting to choke her. Prosecutors have charged Thomas Delgado with one count of first-degree attempted murder and an array of other charges. They have offered a plea bargain of 5 to 15 years in prison -- a deal Delgado has so far rejected.

A police report on the incident says Shayla Delgado was treated for a broken nose at a hospital, but she had no "visible marks on her neck at that time." The police affidavit says she told authorities her husband wrapped his arm around her neck in the fight for the gun. "Ms. Delgado stated that she was in fear that he was going to kill her or hurt her very badly," the affidavit says.

She then got away and he pursued her, according to the affidavit. "He followed her into the bedroom and again attempted to choke her once more," it says. "Ms. Delgado stated she stopped fighting in belief that he would let her go and after a few moments he did."

Shayla Delgado told CNN her nose was broken as a result of the struggle for the gun -- not from a malicious, intentional blow from her husband. Her husband was in crisis, she says, and she saved him from suicide in a violent scuffle.

Delgado's medical records, reviewed by CNN, indicate he remembers few details from that night. Delgado, who was taking the anti-anxiety drug Ativan, "believes that he got suicidal while intoxicated, got a weapon to kill himself, his wife wrestled with him through this, called the police, and with her visible injuries, he was taken into custody for assault and attempted murder," the medical records say.

"He has limited recall of these events," the records say. "He feels if his mother had not died, 'that day' would not have happened." His mother had died three months earlier, in June 2008, after battling breast cancer.

The veterans' court is being set up in response to an alarming trend: A growing number of veterans of the wars in Iraq and Afghanistan are returning home and committing crimes -- from offenses like theft and forgery to more serious charges like domestic violence and murder. However, the court will not deal with homicide cases.

Fort Carson is at the epicenter of the problem, with 14 homicides and attempted homicides there since 2005. Numerous soldiers have been charged with an array of other offenses.

"If you catch this early, you stop a cycle of people who are self-medicating or acting out in a violent way," says Ron Crowder, a district court judge and retired major general from the National Guard who served in Vietnam.

Crowder has been tapped to preside over the new court, which will model itself after a handful of others already established in the United States. Veterans and active-duty soldiers accused of crimes will be offered plea bargains in exchange for mental health treatment that will be rigorously monitored. The district attorney's office will be heavily involved in deciding which cases get sent to the veterans court.

Crowder says the goal of the court is "to get these people the help they may have not gotten heretofore."

According to a recent U.S. Army study, only 65 percent of authorized positions at the behavioral health department at Fort Carson were filled in 2008, forcing Army doctors to send half of all cases to civilian doctors off base.

Fort Carson, home to about 25,000 soldiers, has seen the number of soldiers seeking help skyrocket to 2,400 walk-in cases a month -- or nearly 1 in every 10 soldiers.

"I'm trying to track my population and identify people who are symptomatic," said Col. George Brandt, the senior behavioral health officer at the base hospital.

Brandt came on board last year with a mission to improve mental health care for troubled soldiers. He has brought staffing levels up to 74 percent, with a total of 14 psychiatrists, 14 psychologists and 29 social workers. "I always want more staff and resources," Brandt said. "We're trying to build the system right, get the care near where the soldiers are, increase access."

The facility does not have any in-patient care on the base. Even with staffing shortcomings, Brandt said, "I'm never going to let a soldier go without care who asks for it."

One nearby facility utilized by Fort Carson, he said, has a staff consisting of two-thirds former military members who are specially trained in PTSD. "If I can't provide it, I'm going to get a civilian colleague to help me with that," Brandt said.

Maj. Gen. David Perkins, the new commander of Fort Carson, told CNN the base has spent a lot of time assessing problems with PTSD and trying to develop solutions. One of the biggest concerns, he said, is overcoming the stigma of seeking help.

"This is the key point that we're focusing on across the Army," he said. "You have seen, from four-star generals on down, personally come out and talk about their issues with post-traumatic stress disorder. And this alone has created a large momentum to taking the stigma away."

Delgado was deployed to Iraq as a combat medic in January 2005, stationed about 20 miles south of Baghdad. His war at home began around Christmas of that year.

His medical records show that he "treated more Iraqi casualties than Americans," but he twice lost comrades -- one from war wounds in the field and another to infection. "States he saw it all," the records say. "He takes great pride in being a competent combat medic. He notes he has had great emotional distance, feeling numb and disconnect since his tour."

Delgado's first job back in the States, at Fort Irwin in California, was to train combat soldiers in a mock Iraqi village. Sometimes, he dressed in Army fatigues and battled would-be bad guys; other times, he suited up as an Iraqi villain, according to his wife.

Delgado first began getting treatment for his PTSD at Fort Irwin, according to his family. At that time, his mother was dealing with terminal breast cancer back in the couple's home state of Colorado. In March 2008, as his mother's condition worsened, the Army relocated Delgado to be near his mother's side and the couple, now with a young son, moved to Fort Carson.

He worked at the emergency room of Evans Army Community Hospital on base, and spent his time off with his ailing mother. She died in June 2008, and according to his wife, that's when he began to unravel. Three months later, he was arrested.

How did it come to this -- a decorated war veteran who sought help now charged with trying to kill his wife?

Delgado's medical records reveal that in the nearly three months between his mother's death and the incident in September, the soldier sought help four times at the behavioral health unit at the base hospital.

Each time, he was referred to a civilian doctor. He saw the off-base doctor twice, and was prescribed anti-depressants, sleeping pills and anti-anxiety drugs.

Shayla Delgado believes the treatment her husband received was inadequate. Unfortunately, she says, it took his arrest to get him the care he needed: in-patient treatment at civilian facilities specializing in PTSD.

While her husband tries to heal from his invisible war wounds, she's trying to clear his name.

"It's just so sad because, you know, my husband's a really good person," she said, weeping. "He deserves to be treated better."