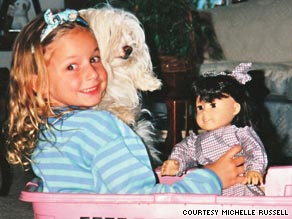 Sarah Skiba visited her father, Paul Skiba, every other weekend.

For Russell, who last saw Sarah more than a decade ago, when she was just 9 years old, some images will never fade with the passage of time.

Russell especially recalls the cold Friday morning in February 1999 when she dropped Sarah off at a bus stop in Westminster, Colorado, for her ride to school.

"She loved to go to school," Russell said, remembering that Sarah ran for the bus and slipped on ice.

"She skinned her wrist at the bottom of her hand, and she was crying," Russell said. "I had a first aid kit and gave her a Band-Aid."

After school that day, Sarah's father, Paul Skiba, met Sarah to spend the weekend together, a visitation arrangement in place since Russell and Skiba divorced several years earlier.

"Her father picked her up at 3:30 p.m.," Russell said. "She visited her father every other weekend."

On Sunday, Sarah joined her father -- who owned a moving company -- and his employee Lorenzo Chivers as they went to a moving job.

Watch a report about the case »

"We know they had two moving jobs that day, one in the morning and one in the afternoon," said Thornton Police Department Sgt. Pat Long, the original investigator on the case.

The second job was for a man who lived in Morrison, Colorado.

The girl, her father and Chivers left Morrison between 5 and 5:30 p.m. to return the moving truck to the Westminster parking lot where Skiba stored his vehicles, Long says.

On the way, a 12-year-old relative of Paul Skiba's girlfriend, Theresa Donovan, received a call from Sarah.

The girl said they were on their way to return the truck and would then come home.

But Sarah and her father never made it back to the house he and Donovan shared.

Michelle Russell later called police, who initially thought it was a parental abduction, even though Chivers was also missing.

"It was almost three weeks after that that I became involved," Long said. "I think we lost some key evidence during the initial time that passed at the scene."

Paul Skiba's family and friends went to his truck storage lot one week after the girl and the two men went missing and grew suspicious when they found what they believed were two bullet holes in the exteriors of Skiba's moving trucks, Long said.

They also noticed that Skiba's only functioning truck was not parked quite the way he would have done it himself.

"Paul was adamant that the moving truck always be parked in a certain position, and the way it was found was pulled nose-in and not back-in," Long said.

Long said he thinks there was an attempt to disguise the scene to make it appear that the victims had come back to the lot and left.

They also identified blood spatter on the two trucks and blood inside the cab of the truck used in the move. Hair attached to a piece of scalp was found on the hood of Skiba's moving truck, and additional hair was on the truck's fender.

"The pool of blood on the ground looked like motor oil that had spilled," Long said.

Authorities believe that the three were ambushed and killed when they returned the truck to the lot. Police think their bodies were put in the back of Skiba's moving truck, driven to another location and dumped.

Chivers may have been forcibly taken from the lot and then murdered or killed at the lot in a manner that would have produced no evidence, according to police.

No bodies were ever found, leaving police to suspect that Chivers was also a victim.

"We did have a witness who saw the truck come back to the lot," Long said.

Chivers' and Skiba's personal cars, which they had left at the lot during their Sunday moving jobs, were parked at separate apartment complexes across Denver. Investigators were never able to make a direct link between the victims and those buildings.

Skiba was the likely target, they say, and Sarah and Chivers were bystanders.

Police have interviewed as many as 80 people, but no arrests have been made.

"In my opinion, I believe we know or we have a strong feeling who is involved in the murders," Long said, declining to say more or disclose the possible motive.

Meanwhile, Russell has been doing her part to help solve the tragic mystery.

She has also raised $50,000 in reward money for information leading to an arrest and conviction in Sarah's disappearance and apparent murder.

"This being the 10-year anniversary, we just really wanted to get a lot of focus on this case again and find my daughter and what has happened to her," Russell said.

On the beach, Russell did things she knew her daughter would enjoy. She even brought cupcakes.

"It's pretty sad when the guest of honor is nowhere to be found."

In her short time, Sarah celebrated life with sports, learning and music.

"Sarah sang as soon as she got up each morning, as well as at the dinner table, in the bathroom and to pet her dogs,'' Russell said. '

'They were like her siblings,'' she added, explaining that Sarah was an only child.

"Someone took her away from me unjustly. I'm not going to sleep until I know why."

Anyone with more information is asked to call the Westminster Police Department at (303) 658-2400.

All About Murder and Homicide • Denver