Horses being killed in South Florida -- for their meat? 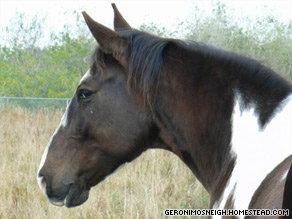 Geronimo "was irreplaceable," says the woman who owned him.

"He was a type of horse that he got along with everybody," says owner Ivonne Rodriguez. She had Geronimo for five years -- until his slaughtered carcass was found under a tree.

For Geronimo, home was a 10-acre pasture in a rural area of Miami-Dade County. The horse, Rodriguez says, made many people happy over the years.

"He was ridden by everybody," she says. "He was irreplaceable."

Geronimo had a distinct look -- brown and white, with a thick white stripe that ran from his forehead to his nose. It was this mark that helped a neighbor identify Geronimo after he was reported missing.

Someone is killing horses in Southeast Florida.

Since January, 19 horses have been reported butchered -- 17 in Miami-Dade County and two in Broward County.

"That number is extremely low," says Richard "Kudo" Couto of the South Florida Society for the Prevention of Cruelty to Animals. "There are many more slaughters in South Florida."

Couto, an SPCA investigator, says many butcherings are going unreported by people who do not want to get involved with law enforcement. Police concede that underreporting of such animal cruelty crimes is a concern.

The reported deaths are being investigated by a multiagency team that includes Scott Andress from the Miami-Dade Police Department.

"In the majority of these cases, the carcasses exhibited signs of being slaughtered and dismembered, and the meat removed from the bodies," Andress says.

Couto says the killing of horses for their meat is South Florida's "dirty little secret." But it is a secret no longer, with the number of reported horse deaths on the rise.

"At this point in the investigation, we're attempting to confirm the existence of a black market demand," Andress says.

Watch why horse owners are terrified »

Law enforcement authorities say it may be premature to focus solely on a killing-horses-for-meat theory. But Couto believes that is exactly what is happening And, he says, it has been going on for years.

The SPCA's Couto says he knows firsthand that there is a black market for horse meat. He even quotes prices -- a pound of horse meat might sell for anywhere from $7 to $20, with one recent report of $40 for a pound in Broward County.

The interest in the meat stems from cultural demand, according to Couto. The Miami area is a melting pot, he says, made up of many nationalities.

"In their country of origin, horse meat is legal to buy and eat," Couto explains.

He also says people may be interested in horse meat because of a false belief that it will cure medical ailments such as AIDS or ease the side effects of chemotherapy.

Andress may not want to pinpoint a motive yet, but he does admit that killing the animals is not the perpetrator's main goal. The goal comes afterward, he explains, with "whatever activity they engaged in postmortem."

In some instances of the grisly "activity" to which Andress refers, the only evidence of a crime is a bare carcass left at the scene.

"Not only was my horse stolen, he was butchered," Rodriguez says.

She believes her beloved horse was tied to a palm tree, and she points out stains that appear to be blood. She thinks he was an easy target.

"Geronimo is a type of horse -- my goodness, if you had an apple in your hand, he's your best friend."

Whoever slaughtered Geronimo concealed the carcass with a tarp and palm fronds. It was found in a rural area near the pasture the animal called home.