Soldier accused of being hit man for cartel

(CNN) -- A U.S. soldier arrested in connection with the killing of a Mexican drug cartel member in El Paso, Texas, allegedly worked as a hit man, court records say. 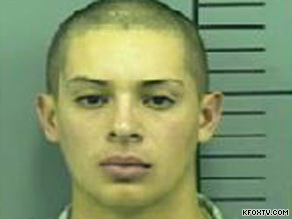 Michael Jackson Apodaca, 18, is a soldier based at Fort Bliss.

Pfc. Michael Jackson Apodaca, 18, was one of three men arrested Monday in connection with the shooting death of the mid-level drug cartel member who also worked as an informant for the United States, according to a complaint affidavit.

Apodaca joined the Army a year ago and worked as a crew member on a Patriot missile launcher, officials at Fort Bliss in El Paso told CNN.

"He was in the top of his class," said Dave Jackson, his grandfather. "You talk to all his sergeants. He's a good soldier. Now, before he went in (and joined the Army), he was in, he was in with a bad crowd."

Police identified the other suspects as Ruben Rodriguez Dorado, 30, and Christopher Andrew Duran, 17.

The victim, Jose Daniel Gonzalez Galeana, was shot multiple times in front of his home on May 15.

The three men are being held on $1 million bond.

Duran and Rodriguez told police that Apodaca was paid to be the shooter, the affidavit states. Cell phone records, witness statements and El Paso Police detectives corroborated this, according to the document.

Orders to kill Gonzalez came from the same cartel he worked for, the affidavit said. Gonzalez had become a target because the cartel believed he was leaking information to authorities, the document said.

The victim and one of the suspects, Rodriguez, were in the Juarez cartel, based across the border from El Paso, police spokesman Chris Mears told CNN. Police believe that Apodaca and Duran were not cartel members, he said.

The three arrested men's phone records showed their approximate locations on the night of the killing, according to court documents. The pattern showed that the suspects were tracking Gonzalez and followed him to the scene of the crime, the affidavit states.

During an interrogation, Rodriguez told investigators that he ordered Gonzalez's execution and that he paid the participants for their role in the killing, the affidavit states.

Apodaca joined the Army in September 2008, according to a statement from Fort Bliss in El Paso. He is a member of the 11th Air Defense Artillery Brigade at Fort Bliss, the statement said.

El Paso County District Court records show that Apodaca was arrested 10 days after Gonzalez's killing and charged with attempted theft of property, a second-degree felony. He posted a $10,000 bond a few days later.

CNN's Melanie Whitley and Tracy Sabo contributed to this report.