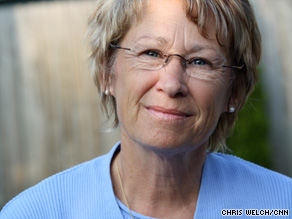 Patty Wetterling says the return of Jaycee Dugard "is reaffirming" and "a success."

Wetterling's son Jacob is still missing after a gunpoint abduction almost 20 years ago near their home in St. Joseph, Minnesota.

"Jacob was with his best friend and his brother. They witnessed it," Wetterling says, recalling that day back in October 1989. "They saw this masked man with a gun."

Jaycee Dugard's return "is reaffirming," Wetterling adds. "There are cases where nobody believed [the children] were coming home, and they did. This is one. So for me, it makes my heart smile. It's a success."

Both children -- Jaycee Dugard and Jacob Wetterling -- were 11 years old at the time of their abductions.

Wetterling met Dugard's mother, Terry Probyn, on a television show -- "it might have been 'Geraldo,'" as Wetterling recalls -- shortly after Jaycee's disappearance, and they also spoke on the phone occasionally.

"It's just phenomenal," Wetterling says of Dugard's case. "I know a lot of parents of missing children, and we all hope and pray that one day we'll get to hold our kids again. That's the goal."

Wetterling says she hasn't spoken to Probyn since her daughter's discovery because the media chaos has yet to subside and since the family undoubtedly "needs some time, they need some space ... to heal."

But knowing that the Dugard family now has a chance to rebuild their lives does more than fuel her optimism for Jacob. It gives her reason to go to work every day.

Since her son's kidnapping, Wetterling has turned being an advocate for families of missing children into a full-time job.

After helping create the sex offender registry for Minnesota and subsequently for the nation, she helped build Team HOPE -- Help Offering Parents Empowerment -- a parent-to-parent mentoring program for mothers and fathers in similar situations.

"Most parents know nothing about child abduction, so when it happens you just scramble for what's out there," Wetterling says.

She felt so strongly that children needed a bigger voice in government that she ran for Congress in 2004 and 2006. She lost, but not without garnering more than 40 percent of the vote each time.

A secondary math teacher until just shortly before Jacob's abduction, Wetterling currently heads up the sexual violence prevention program at the Minnesota Department of Health in St. Paul.

"We're all seeking solutions ... some kind of protection, some kind of prevention work. So that's really where my energy flowed. 'How can we stop this from happening in the first place?'"

A large portion of Wetterling's job centers on ending social norms in television, video games and advertising that, she says, tolerate sexual victimization and in some cases "sort of encourage it."

"We [need to] collectively say, 'This is not OK -- you cannot sexually victimize.'"

Through the program's five-year strategic plan, Wetterling hopes to lower the numbers of children who become victims. But she says she'll also continue educating others and, specifically, urging people to report any peculiar behavior.

For example, the case of Jaycee Dugard's is similar to many of the children who've turned up after being abducted in that the only reason they were found is because of "somebody noticing something and calling the police."

With Dugard, it was a police officer who noticed something suspicious, and Wetterling urges everyone to be just as vigilant.

"These kids do not come running forward on their own. They are found by someone else," she explains. "The bottom-line lesson is to tell people to report things when they see them. Trust your instincts ... You'd want somebody sticking up for your child, so don't second-guess. And call."

Wetterling described another example -- the case of a child taken from Wisconsin to a hotel in Texas.

"The maid in the hotel said, 'There's something not right about this relationship.' And the second time this girl was on 'America's Most Wanted,' the maid was watching and called the show. Within minutes [the child] was found."

An instance like that or Jaycee Dugard's could very well be what brings Jacob home someday.

"C'mon home, Jake," Wetterling says when asked what she'd tell her son in the event he sees this story. "We never quit. We need you home. And to the man who took him: It's time. It's time to lift the burden that you've carried, as well, for all these years and tell us where he is and what happened. It's time."

All About Missing Children