ROCKY MOUNT, North Carolina (CNN) -- Authorities in North Carolina have jailed a suspect in the slaying of one of five women whose bodies have been found since 2005 in remote areas outside Rocky Mount, the Edgecombe County sheriff said Tuesday. 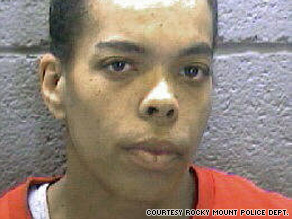 Sheriff James Knight said Antwan Maurice Pittman, 31, was charged with first-degree murder in the death of Taraha Shenice Nicholson, whose remains were found in a wooded area on March 7.

Nicholson was 29 when she was reported missing on February 22, Knight said at a news conference in Tarboro. Pittman, of Rocky Point, was being held without bond.

All five of the slain women were African-American, and authorities said they were from an area frequented by prostitutes. Four of them lived in Rocky Mount, which is about 55 miles northeast of the state capital, Raleigh.

"Just the fact that the bodies have been found close together would really argue for a serial killer," Teague said. He also said he believes the killer is someone with a lot in common with his victims.

"Their economic level, their background, the same race. So I think it's someone who would fit very easily within the environment," the psychologist said.

The body of the first woman was discovered in May 2005. All the remains were found near the Seven Bridges Road, which snakes northeast from Rocky Mount into rural Edgecombe County.

The probe into the deaths of the other four women is ongoing, said Knight, who is leading a joint investigative task force of his deputies, Rocky Mount police and the state Bureau of Investigation. Representatives from the other two groups also attended the news conference.

"The investigators with the task force have worked countless hours, days and nights in order to bring this case to the point where it is now," said Renee Robinson, special agent with SBI. "We are following up on leads as they develop."

He has said it appears the women "suffered a similar death," but authorities have not divulged further details. They did tell CNN that two of the victims were strangled, and one was stabbed and beaten.

Manley identified the four women whose bodies were found as:

• Jarneice Latonya Hargrove, 31, whose skeletal remains were found June 29, 2009 in woods off the road.

All About North Carolina