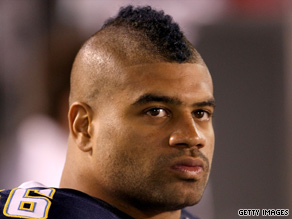 Shawne Merriman is accused of restraining reality TV star Tila Tequlia as she tried to leave his home, police say.

Authorities responded to a disturbance call about 3:45 a.m. Sunday from a woman who said she had been choked and restrained by a male, the sheriff's department of San Diego County, California, said in a statement.

When police arrived, "the reporting party identified herself as Tila Nguyen, aka Tila Tequila, and her alleged assailant as Shawne Merriman," the statement said.

"Nguyen told deputies she had been choked and physically restrained by Merriman when she attempted to leave his residence," the statement said.

Watch Merriman's side of the story »

Nguyen signed a citizen's arrest at the scene, and Merriman was taken into custody on suspicion of battery and false imprisonment, according to the statement.

Deputies didn't see any physical injuries on Nguyen, but she asked to be transported to a local hospital, sheriff's spokeswoman Jan Caldwell said. Nguyen's condition was not immediately known.

Merriman's attorney, Todd Macaluso, told reporters that Nguyen was "extremely intoxicated and inebriated" and that the player tried to make arrangements for her to leave the house.

The district attorney's office will determine whether criminal charges will be pursued, Caldwell said.

On her Twitter account, Nguyen did not mention the incident but tweeted about going to meet Merriman on Saturday.

In a statement posted on the Chargers' Web site Sunday, team General Manager A.J. Smith said it is "disappointing to hear about the issue involving Shawne Merriman."

"We'll continue to monitor the situation and let the legal process run its course," Smith said.

Merriman, a three-time Pro Bowl selection, is entering his fifth year with the Chargers and the NFL. He recorded at least 10 sacks in each of his first three seasons, but he was limited to one game last season because of a knee injury that required surgery.

The Chargers begin their 2009 NFL regular-season campaign on September 14 in Oakland, California, for a game against the Raiders.