ROME, Italy (CNN) -- The murder trial of American student Amanda Knox in the death of her housemate two years ago resumed Monday in Italy after a summer break. 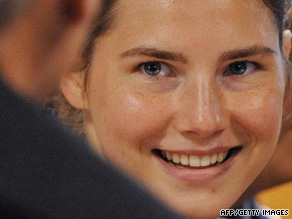 They are accused of killing British student Meredith Kercher, Knox's housemate in Perugia, a scenic university town north of Rome.

Kercher, 20, died in what prosecutors called a "drug-fueled sex game." She was found half-undressed in bed, with a stab wound to her neck on November 2, 2007.

Knox and Sollecito were both present at Monday's court session, Kercher's attorney Francesco Maresca said. Sollecito's defense attorneys requested the annulment of DNA analysis, which investigators say shows Sollecito's genetic material on the clasp of the victim's bra. The judge rejected the request.

The next hearing is scheduled on Friday, Maresca said.

Knox, from Seattle, Washington, took the stand in June and testified that she was not at the girls' villa the night her roommate died, which authorities think was the evening of November 1.

She said she was visiting her then-boyfriend, Sollecito, at his home, where the two watched a movie, smoked marijuana, had sex and went to bed.

On her return to their villa the next morning, Knox said, she noticed "strange things," such as the front door left open, dried blood in the bathroom sink and a locked door to Kercher's room.

When Knox returned to Sollecito's house, he suggested they call police in case the house had been burgled, she said. Police found Kercher's body in the house.

Prosecutors say evidence places the defendants at the scene. They also said the suspects gave investigators confusing and contradictory statements about their whereabouts the night Kercher died.

Knox said she gave conflicting answers at the interrogation on November 6 because of police pressure and her confused state.

"When I would say that I was with Raffaele, they would say, 'You are a liar,' and they repeated this," she said in June, speaking about the police. "'You will go to prison for 30 years. ... You must remember.'"

During the trial, she said police had slapped her on the head during questioning, a charge she had made before.

The case has attracted worldwide media attention. During her testimony in June, cameras were barred from the courtroom because the prosecutor said he wanted to avoid sensationalism.

A third person, Ivory Coast native Rudy Hermann Guede, was convicted of murder in the case in October and was sentenced to 30 years in prison. He is appealing his conviction.