(CNN) -- Twenty-three suspects, including nine American Airlines employees, were arrested Tuesday for allegedly transporting nearly $20 million worth of cocaine on flights into and out of Puerto Rico, federal authorities said. 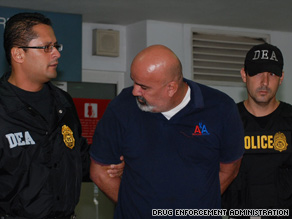 Most of the commercial flights carrying suitcases stuffed with illicit drugs came into San Juan, which was a transshipment point for drugs bound for cities on the U.S. mainland, authorities said.

The drug trafficking organization headed by defendant Wilfredo Rodriguez Rosade had been operating since 1999, according to the Drug Enforcement Administration and the FBI, which participated in the long-running investigation.

In a September 9 indictment unsealed Tuesday, Justice Department officials also moved to seize $18 million worth of property owned by the suspects, including seven homes, three businesses and an apartment complex.

All but one of the arrests occurred in Puerto Rico. The lone arrest on the U.S. mainland was in Miami, Florida.

"By denying the drug traffickers alternate smuggling routes, we disrupt the flow of drugs into Puerto Rico and discourage the use of the island as a transshipment point in the Caribbean," he said in a news release.

The agency said that if they are convicted, the defendants taken into custody would face sentences ranging from 10 years to life in prison and personal fines of up to $4 million.

American Airlines issued a statement confirming some employees had been arrested, but could not confirm the number because of its privacy policy, spokesman Tim Wagner said in an e-mail. The airline has been working with authorities, he said.

"As a company, we hope that the actions of a few employees don't reflect negatively on the tens of thousands of ethical American Airlines employees who work hard to serve the public daily," Wagner wrote.