FBI: Beating at Cracker Barrel may be hate crime

(CNN) -- The FBI is investigating as a possible hate crime an incident in which a woman was beaten to the ground in front of her child at the entrance to a Cracker Barrel restaurant in Morrow, Georgia, south of Atlanta. 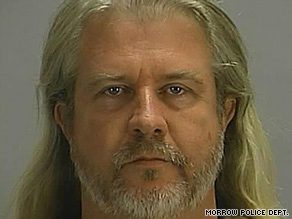 Troy Dale West, of Poulan, Georgia, is facing battery and cruelty to children charges after the incident.

Troy Dale West Jr., of Poulan, Georgia, is facing charges including misdemeanor battery and disorderly conduct after allegedly beating Army reservist Tashawnea Hill, 35, after the two had words at the entrance of the Morrow, Georgia, restaurant the evening of September 9.

Hill, an African-American, told police that West, 47, yelled racial epithets at her as the attack took place.

"He did punch me with a closed fist repeated times. My head is still hurting today. I have knots on my head," Hill told CNN Wednesday night, adding she also was kicked.

The FBI has "initiated an investigation in the matter to determine if a civil rights violation occurred," the agency said in a statement.

Because the alleged incident happened in full view of Hill's 7-year-old daughter, the Clayton County district attorney's office added a felony charge of cruelty to children.

"[The woman's daughter] was visibly upset the night of the attack," according to Capt. James Callaway of the Morrow Police Department, who said he was on the scene shortly after the alleged attack.

A police report of the incident said Hill's daughter was "crying uncontrollably and her body [was] shaking/trembling" from witnessing the attack.

Hill told police the incident started when she and her daughter were entering the restaurant at the same time West and his wife were exiting.

"The man slung open the door pretty hard and fast and I had to push my daughter out of the way," Hill told CNN affiliate WSB-TV. "I turned to the man and I just said, 'Excuse me sir, you need to watch yourself; you almost hit my daughter in the face.' And from there it just went downhill."

West, according to the police report, admitted striking Hill "after she spit on me and accused me of trying to hit her daughter with a door."

Appearing on CNN Wednesday night, Hill and her attorney, Kip Jones, denied that she spat on West. Jones said he saw surveillance video of the incident.

"At no point did Ms. Hill do anything to provoke the attack. She did not spit on Mr. West. She spoke to him. He attacked her," Jones said.

Police say Hill stated that "West punched her in the left cheek, forehead, kicked her body in several places, and punched her head in many areas several times."

The Cracker Barrel's manager told police he stepped between West and Hill to stop the alleged assault.

"It's just terrible when something like this happens anywhere, let alone in one of our stores," Davis said. "It's worth noting that Cracker Barrel employees did their best to assist Hill as soon as they became aware of the situation."

Jones said he was "convinced this was a hateful, racist attack ... based on the N-word, the B-word, etc."

CNN's efforts to reach West at his home and business were unsuccessful. Police said they had no indication West had an attorney. He is free on bond awaiting a hearing in the incident, the Clayton County jail said.

Hill was treated at a hospital after the attack and released.

The Clayton County district attorney has forwarded surveillance video of the incident to the FBI.

Edward DuBose, president of the Georgia State Conference of the NAACP, said Wednesday his organization was concerned about the alleged assault.

"We do know that to see a young mother beat [and] grabbed the way this young lady was, raised concern to us in this community," DuBose said at a news conference in Morrow. "Certainly it raised concern in this incident that some of the language ... was used toward this mother."

He said he hoped the FBI would ensure "that justice is served." He said his organization hadn't spoken to Hill, but that it planned to reach out to her.

All About Federal Bureau of Investigation • Clayton County