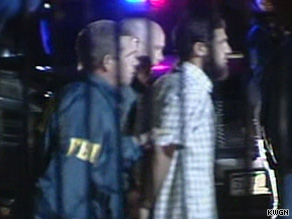 FBI agents raided Najibullah Zazi's home on Saturday and took him into custody.

Zazi and his father, Mohammed Zazi, were handcuffed without incident late Saturday as authorities raided Zazi's home in the Denver suburb of Aurora, according to CNN's Jim Spellman.

All three men are charged with knowingly and willingly making false statements to the FBI.

Arthur Folsom, attorney for the Zazis, met with them at the FBI offices in Denver Sunday morning, said Wendy Aiello, the attorney's spokeswoman.

Watch Zazi being taken into custody »

Najibullah Zazi and Mohammed Zazi are scheduled to appear in federal court in Colorado on Monday. Afzali is scheduled to make his initial court appearance in New York on Monday.

Earlier on Saturday, Najibullah Zazi, who had been questioned for the past three days by federal investigators, declined to attend a fourth day of interviews.

Watch why authorities want to talk with Zazi »

Zazi has admitted to having ties to al Qaeda, an administration official familiar with the matter told CNN on Friday.

Folsom denied the allegations Friday night and said Zazi did not admit to having ties to the terror group. He also said the FBI has not made an offer.

"He never admitted going to a terrorist training camp," Folsom told CNN affiliate KUSA in Denver. "Some of the information in news reports was not true," Folsom said. "There have been no plea negotiations ... they (FBI) haven't made any offer."

Zazi also told The Denver Post on Saturday that he has not admitted any ties to the terrorist group. He also denied taking part in insurgency training in Pakistan or involvement in a terror plot.

"It's not true," Zazi said in a phone interview with the newspaper. "I have nothing to hide. It's all media publications reporting whatever they want. They have been reporting all this nonsense."

He said he lived in Pakistan before moving to New York as a teenager. While in Pakistan, he said, he spends a lot of time with his wife.

"I was there (at her house) the whole time," Zazi said.

The alleged terrorist plot, which came to light this week after raids in New York, may have involved a major transportation center, like a large railroad or subway station, sources close to the investigation told CNN on Thursday.

There were plans for an attack, presumably in the New York area, where crowds are large and security screening for nonairport travelers is lax, the sources said.

Two sources familiar with the investigation said that Zazi had video of New York's Grand Central Terminal, a massive junction of rail and subway lines, as well as shops and restaurants, which see an average of more than a half million visitors per day.

A former counterterrorism official said backpacks, computers and maps were found during searches in the New York City borough of Queens, and field tests turned up positive for explosives. But such tests often yield false positives, and the former official was unaware whether more definitive test results had been obtained.

On Wednesday, federal agents searched Zazi's apartment in Denver and another home in a Denver suburb in connection with the investigation.

A law enforcement official told CNN that diagrams showing how to make bombs were found on the computer that Zazi had with him when he was stopped in New York during a recent visit, but Folsom has denied those allegations.