DALLAS, Texas (CNN) -- An investigation into claims that faulty evidence led Texas to execute an innocent man in 2004 was at a "crucial point" when the state's governor replaced three of its members this week, one of the three said Thursday. 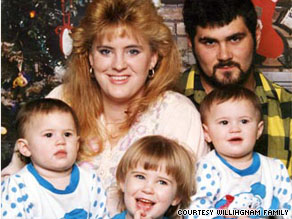 Gov. Rick Perry's shake-up of the Texas Forensic Science Commission came two days before it was to hear from the author of a scathing report in the case of Cameron Todd Willingham. That Friday session has been postponed indefinitely in the wake of Perry's new appointments, and critics of the governor accused him of trying to quash the Willingham probe.

"I think people are making a lot of this issue," Perry told reporters Thursday in Austin, Texas. He said the replacement of commission Chairman Sam Bassett and commissioners Alan Levy and Aliece Watts, whose terms had expired, was "pretty normal protocol."

The Forensic Science Commission began investigating the Willingham case in 2008, hiring Maryland fire investigation expert Craig Beyler to examine the evidence used to convince a jury the fire that killed Willingham's three daughters was deliberately set. Levy said Thursday he told the governor's office "that it would be disruptive to make the new appointments right now."

"The commission was at a crucial point in the investigation," he said. Asked about the future of the Willingham investigation, he said, "I don't know if it will ever be heard."

Levy, a top prosecutor in Fort Worth, Texas, said he had asked to remain on the commission, but received no response from the governor's office. Sam Bassett, the panel's former chairman, said he also asked to remain.

Beyler's report is the latest of three to conclude that arson was not the likely cause of the 1991 fire, and the first commissioned by a state agency. Death penalty opponents say an impartial review of the Willingham case could lead to an unprecedented admission that the state executed an innocent man.

The Beyler report concluded that the ruling of arson at the heart of Willingham's conviction "could not be sustained" by modern science or the standards of the time. The report, filed in August, said the state fire marshal who testified in Willingham's trial approached his job with an attitude "more characteristic of mystics or psychics" than with that of a detective who followed scientific standards.

Perry, who faces a Republican primary challenge in his bid for a third term next year, refused to issue a last-minute stay of execution for Willingham in 2004 and has said he remains confident that Willingham was guilty. So have authorities in Corsicana, south of Dallas, who prosecuted Willingham in his daughter's deaths.

Asked whether the governor wants to see the Willingham investigation go forward, Perry spokeswoman Katherine Cesinger said, "That's a decision of the commission."

"The governor has made his position on this case clear, and has said that he has not seen anything that would cause him to think that the decisions made by the courts of Texas was not correct," Cesinger said. "Beyond that, the business of the commission is up to the commission."

Wednesday's appointments raised concern among Willingham's relatives, who worked to avert his execution and to clear his name after his death.

"It sounds like someone made Gov. Perry mad," his stepmother, Eugena Willingham, said after hearing the news during an interview with CNN at her home in Ardmore, Oklahoma.

"I think it's going to delay things," she said. "It makes me wonder why."

"Rather than let this important hearing go forward and the report be heard, the governor fires the independent chairman and two other members of this commission," Scheck said. "It's like Nixon firing Archibald Cox to avoid turning over the Watergate tapes."

The Innocence Project seeks to help prisoners who were wrongfully convicted. Its 2006 report on the Willingham case concluded that "an innocent man was executed." That report led to Beyler being hired by the Forensic Science Commission to review the case.

Neither Bassett nor Levy would say whether they believed political considerations were behind their replacement, though Bassett said in a written statement that the investigation should not be dropped "because there might be political ramifications."

Perry replaced Bassett with John Bradley, the district attorney of Williamson County, north of Austin. The governor appointed Bradley to his current post in 2001, and Scott Cobb, president of the Texas Moratorium Network, called him "one of the most hard-line prosecutors in the entire state."

"I really don't have a lot of confidence with him on this commission," Cobb said. On the other hand, however, "If he is convinced by the evidence, it would make an even bigger impact."

Bradley spoke about the appointment via telephone Thursday afternoon.

"My day started off yesterday with a phone call from the governor's office informing me that I had been appointed, so I've got a lot of work to do," he said. "I've got a pretty full-time job as district attorney and was already chairing another statewide commission," one that focused on mental health issues in the Texas criminal justice system.

He said he would "approach the job very methodically," and said he did not know when the Beyler hearing would be rescheduled. But he dismissed claims that his appointment was meant to stall the Willingham investigation.

"People tend to read into these things the kind of preconceived notions they come to these issues with," Bradley said. "They're not going to change those positions overnight. They're going to watch how the commission does its work." He said if he does his job right, the commission will "probably satisfy most of those people."

All About Capital Punishment • Rick Perry