WASHINGTON (CNN) -- Ohio's governor granted temporary reprieves to two death row inmates just hours after a federal appeals court blocked the execution of one of them -- adding to the mounting confusion over the state's capital punishment system. 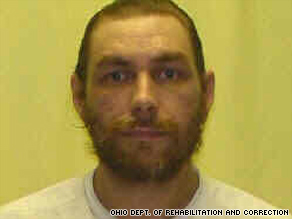 Lawrence Reynolds is on death row for killing his neighbor in 1994 during a robbery in suburban Cleveland.

However, Gov. Ted Strickland announced he would delay Reynolds's execution until March, at the earliest. Another death row inmate, Darryl Durr, scheduled to be executed in coming weeks, also was granted a reprieve until at least April 2010.

"Additional time is needed to fully conduct a thorough and comprehensive review of an alternative or backup lethal injection protocol that is in accordance with Ohio law," Strickland said in his announcement.

No explanation was offered on why Ohio's executive branch switched its official position in such a short period of time. The state was expected to ask the Supreme Court for dismissal of the pending appeal.

Reynolds was sentenced to death for beating and strangling Loretta Mae Foster, his 67-year-old neighbor, during a home invasion in suburban Cleveland.

Technicians tried for two hours on September 15 to find suitable veins to insert the chemicals. Strickland has delayed the execution indefinitely.

Broom will get a hearing before a federal judge next month. His lawyers argue allowing a second execution attempt would be unconstitutional.

Judges on the appeals court were at odds over the Reynolds appeal.

"Given the important constitutional and humanitarian issues at stake in all death penalty cases, these problems in the Ohio lethal injection protocol are certainly worthy of meaningful consideration," wrote Judge Boyce Martin.

"Why assume an execution protocol is unconstitutional when one of the humane features of the protocol -- that the state will not continue trying to access a usable vein beyond a sensible time limit -- is being followed?"

All About Capital Punishment • Ted Strickland