Editor's Note: The FBI had three openings on its list of the Ten Most Wanted Fugitives. Monday night, FBI Assistant Director Kevin Perkins joined CNN's Rick Sanchez exclusively on "Campbell Brown" to announce who filled the first open spot. Tune in at 8 p.m. ET to "Campbell Brown" over the next two nights to find out who else will fill the slots. 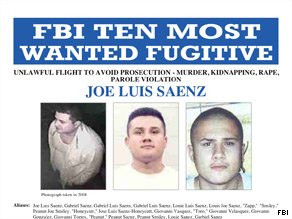 Officials say Joe Saenz is thought to be linked with Mexican drug cartels.

(CNN) -- Joe Saenz rubbed his hands together and smiled as he walked up to a Los Angeles County, California, home.

His demeanor gave no clues as to what would happen next.

Once in the front yard of the home, police said, he drew a gun and shot the victim several times, then in the head, execution-style. The slaying, caught on tape in October 2008, was over drug money, police said.

At the time, Gonzales had no idea that videotape would break open a case that has frustrated local and federal authorities for a decade.

Saenz had eluded authorities for so long, they thought he might be dead. Now, they knew Saenz, wanted in connection with four murders, a kidnapping and a rape, was still out there.

Saenz is the newest person on the FBI's Most Wanted List, after three fugitives on the list were recently caught.

A member of the Cuatro Flats gang, Saenz first stepped into police crosshairs in 1998. He was wanted for shooting and killing two rival gang members at a housing complex in the Hollenbeck area of Los Angeles.

Watch the FBI announce the latest member of its Ten Most Wanted list exclusively on "Campbell Brown"
Tonight 8 p.m. ET

Then, he was a fresh-faced 22-year-old with a dark side.

"Just gruesome, gruesome, cold-blooded," Chavarria said. "Just walks right up to these guys, shoots them and then just walks over and stands over them and shoots them each in the head and casually walks away."

They knew he was dangerous, and they had to find him.

"We had pictures of him constantly on our dashboard so that there was no question if we saw this guy we knew who he was," Chavarria said.

Within days, Saenz -- also known as Jose Saenz, Louie Louie and more than two dozen other aliases -- was wanted for a third murder.

Investigators said Saenz suspected the mother of his child, Sigreta Hernandez, would turn him in, so he kidnapped, raped and murdered her at his grandmother's house.

"He leaves a note indicating that his grandmother has nothing to do with the murder and that he left the scene. And from that point on he became a fugitive for the next 10 years," Gonzales said.

"He's believed to be linked with the cartels in Mexico, bringing large amounts of narcotics into the Los Angeles area, Garriola said. "And I think the reason for the last crime was a direct relationship to the cartels."

He's eluded police for years, and has reportedly made statements that he plans to kill a police officer if they ever find him and arrest him, according to the FBI's Most Wanted Web site.

Now, authorities are hoping the video from October 2008 will help them get one step closer to the man who they say terrifies those who know him just as much as his victims.

The chilling video, Chavarria said, shows why Saenz is so dangerous.

"It looks like he really enjoys what he does, he enjoys killing people," he said.

All About Federal Bureau of Investigation • Gang Violence