(CNN) -- A fatal police chase involving a teenager on a bicycle has led the Pensacola, Florida, police department to revamp its policy on stun guns, officials said. 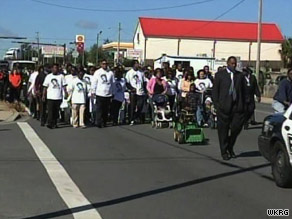 The chase through Pensacola's streets in the predawn hours of October 3 has also raised the issue of whether a national stun gun policy is needed, a civil rights group said.

Victor Steen, 17, died after being run over by a police cruiser during a pursuit. The young man, who was pronounced dead at the scene, suffered multiple blunt impact injuries, according to the Escambia County Medical Examiners Office.

The chase started when officer Jerald Ard spotted Steen at a construction site about 2 a.m. and the teenager fled, according to the Pensacola Police Department. Steen was on his bicycle, pursued by Ard in his police car.

Ard, 35, tried unsuccessfully to fire a stun gun at Steen, according to a police department news release.

The teen eventually crashed his bicycle and fell into the path of the police car, according to Pensacola Assistant Chief Chip Simmons.

Initial "exam findings do not mention any Taser probes on the body," said Jeff Martin, director of the medical examiners office.

Even though the teenager was not electrocuted by the stun gun, the incident has brought questions from some about safety procedures when it comes to using the weapons.

Policies regarding stun guns vary from department to department, but Fred Wilson, director of operations for the National Sheriffs' Association, said that the general policy on stun guns should focus on appropriate training and an appropriate reporting system for when they are used.

Officials with the Southern Christian Leadership Conference, a civil rights group that advocates for a uniform federal stun gun policy, met with the Pensacola police and city officials Thursday. The organization asked the department whether its officers were trained to shoot a stun gun from a moving vehicle.

Before Steen's death, the department's policy required that officers act "professionally" and that stun gun use be "reasonable."

"If it had not been for the reckless use of the Taser gun, this tragic accident could have been avoided," said Dexter Wimbish of the Southern Christian Leadership Conference.

The organization said it will release a report in December showing that more than 400 people have died needlessly from a weapon touted as being non-lethal, Wimbish said.

The victim's mother, Cassandria Steen, told CNN affiliate WKRG that the ordeal "has been very difficult, but unfortunately, we can't deal our own hands in life."

"He was a wonderful kid, wonderful, always loving, always wanting to hug," she said. "I was his mommy, and he was my baby."

The leadership conference held a silent march from the scene where the teen died to the church where his funeral was held.

At the march, Cassandria Steen said her desire was "that we will get this thing under control; that maybe somebody else won't have to go through what I'm going through."

Ard, a four-year member of the police department, has been placed on administrative duty while the incident is under investigation, Simmons said. The officer previously had only a single warning on his record, from a minor accident.

The Florida Highway Patrol and the Florida Department of Law Enforcement are handling the investigation, Simmons said.

The law enforcement agency is in the fact-finding portion of its investigation, spokesman Mike Morrison said. When the investigation is complete, the department will file a report with the state attorney in Escambia County, he said.

"Our job is to gather the information, and it's up to the state attorney to determine if any charges will be filed," Morrison said, adding that he could not give a timeline for the report's completion.

Simmons said a review of the incident would determine whether Ard's use of his stun gun was "reasonable" before passing any judgment on the officer.