Editor's note: The FBI has one more opening on its list of the Ten Most Wanted Fugitives. Tune into CNN's "Campbell Brown" at 8 p.m. ET Wednesday to find out who fills the final slot. 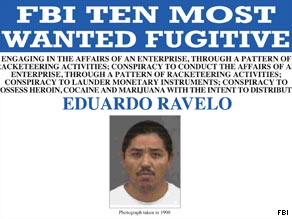 Alleged cartel hit man Eduardo Ravelo has been added to the FBI's most wanted list.

EL PASO, Texas (CNN) -- Eduardo Ravelo is described as a "ruthless killer" who has gone to great lengths to avoid law enforcement while contributing to the bloodshed that terrorizes the border between Texas and Mexico.

Authorities say the suspected hit man with close ties to the Juarez drug cartel has shaved his head, undergone plastic surgery and even manipulated his fingerprints to elude capture.

On Tuesday, Ravelo was named to the FBI's Ten Most Wanted Fugitives list, taking the second of three vacant slots.

Officially, he's wanted on federal racketeering charges, but the FBI says Ravelo's criminal activities run much deeper. He is believed to be responsible for dozens of murders and assaults, as well as drug trafficking, extortion, weapons offenses and money laundering, FBI Agent Samantha Mikeska said.

Watch the latest on Ravelo »

"He has no respect for human life," she said.

Watch the FBI announce the latest addition to its Ten Most Wanted list.
Tonight, 8 ET

Mikeska is leading the hunt for Ravelo, who goes by the nickname "Tablas," which is Spanish for wooden plank. He's also called "Two-by-four" and is believed to be hiding with his wife and children, probably in a Barrio Aztecas-controlled neighborhood in Juarez, Mexico, just across the border from El Paso, Texas.

"Eduardo Ravelo rose to power within the Barrio Aztecas criminal enterprise because of his connections with the Juarez cartel and also [because] he's a ruthless killer and will basically carry out what the Juarez cartel wants him to do," Mikeska said.

Barrio Aztecas started as a Texas prison gang in the 1980s. Federal authorities say the profits from drug sales are often transferred to the commissary accounts of gang members in prison.

Ravelo came to his position atop the gang violently, the FBI agent said, killing the person whose place he took. His power comes from his close ties to the Juarez cartel. He has spent the past 15 years cultivating relationships with some of the highest-ranking cartel members.

Drug cartel leaders often align themselves with street gangs, employing gang members to carry out some of the cartel's most vicious work.

U.S. authorities say the commanders of the Juarez cartel often call on Ravelo to execute their enemies. In exchange, Ravelo and his Barrio Aztecas comrades get drugs to sell on the streets of Mexico and the United States.

FBI investigators say they believe that in March 2008, Ravelo carried out a hit on a captain in his own gang. Mikeska believes Ravelo stabbed him several times and shot him in the neck. Shortly after the murder, he became a Barrio Aztecas "capo," or captain.

In recent years, federal agents have arrested dozens of Barrio Aztecas' 3,500 members, with six of its leaders sentenced to life in prison.

But Ravelo has eluded authorities. He holds both U.S. and Mexican citizenship, federal authorities say, helping him escape across the border into Mexico with his wife and children.

While he may be staying out of sight, he's keeping up his violent work, Mikeska says, and he has the resources to do so.

"He has an entourage, he has bodyguards, he has armored vehicles to protect him from rival gangs and rival cartels," Mikeska says.

All About Federal Bureau of Investigation • Ciudad Juarez